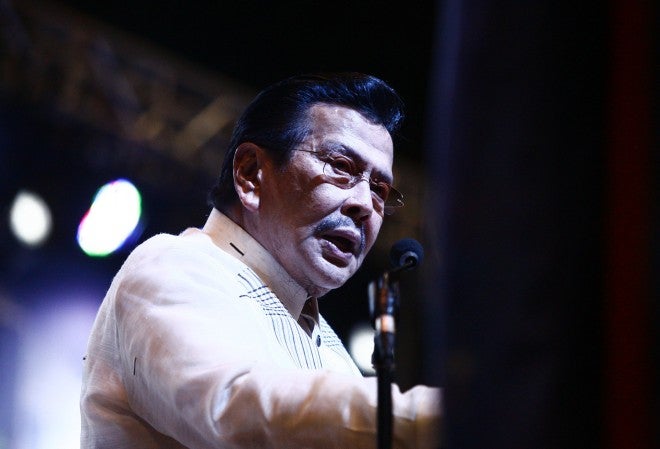 MANILA, Philippines–The Supreme Court may have declared former President Joseph Estrada qualified to seek the Manila mayoral seat in 2013 but it made no pronouncement as to whether he could run again for president.

In an interview, lawyer Theodore Te, Supreme Court spokesman, said the tribunal’s ruling last week only settled the issue of Estrada’s eligibility to run for mayor.

“The decision resolved only the issue involving the qualification of the former president in the 2013 election. His eligibility for the 2016 presidential election is another matter,” Te said.

The high court has yet to release the text of the decision it announced on Jan. 21 dismissing the disqualification case filed against Estrada by his opponent for mayor, Alfredo Lim, and the latter’s lawyer, Alicia Risos-Vidal.

The petitioners said that the pardon granted Estrada in 2007 after his conviction for plunder was not absolute and barred him from seeking public office. The Supreme Court, however, ruled otherwise.

Te recalled that the issue on whether Estrada could run for president without violating the constitutional ban on reelection was raised in 2010, when he was one of the nine candidates and ended up in second place.

“But the court did not resolve the issue and decided to dismiss the petition for being moot since Mayor Estrada did not win anyway,” Te said.

Estrada was deposed following the Edsa II people power revolt in January 2001. The Sandiganbayan antigraft court convicted him of plunder in September 2007 and sentenced him to life imprisonment.

The following month, however, President Gloria Macapagal-Arroyo granted him a pardon.