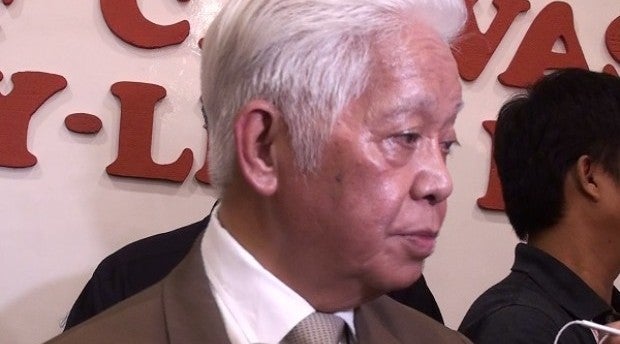 MANILA, Philippines–Commission on Elections (Comelec) Chair Sixto Brillantes Jr. has said the en banc can choose among themselves his temporary replacement as poll chief until President Aquino appoints a permanent one in March when Congress adjourns its session.

In an interview with reporters late last week, Brillantes said that traditionally, the senior member of the commission en banc would assume the position in a temporary capacity. In the present case, it should be Commissioner Christian Robert Lim, he pointed out.

Other members of the en banc are Commissioners Elias Yusoph, Lucenito Tagle and newcomers Luie Guia, Al Parreño and Arthur Lim. But Yusoph and Tagle are also retiring next month. Christian Robert Lim, Arthur Lim, Guia and Parreño will be the holdovers.

“Under the Supreme Court ruling in the Yorac case, the en banc determines among themselves who will be the acting chairman… although traditionally, it should be the senior one,” said Brillantes, who is set to retire next month.

The President appointed Brillantes chair of the poll body in January 2011 to serve then Chair Jose Melo’s unexpired term. The full term of a Comelec chair or commissioner is seven years.

Brillantes said Lim was fit to take over his position while awaiting Aquino’s appointment since he had been with the election body for nearly four years. Lim was officially appointed Comelec commissioner on April 4, 2011.

“Commissioner Lim will be the senior commissioner and he is the one with me as early as 2011 so he knows the background of everything,” he said. “The three others are quite new.”

Earlier, Brillantes said he had been convincing Justice Secretary Leila de Lima, also his close friend, to take his place. But De Lima said she would take her cue from the President.

He said the election body was expecting the President to make an official appointment after Congress adjourned in March. “In the meantime, an acting chair should take over from Feb. 2 to until such time a permanent appointment has been made,” he said.

Brillantes assured the public that the retirement of three commissioners next month would not hamper the Comelec’s preparation for the 2016 balloting since the en banc only needed four members to be able to come up with decisions.

“The only issue there is that since they are only four in the en banc, they have to act in unanimity or else they cannot get the needed four votes [to enact a decision],” he said.