House to investigate ‘outing’ of homeless 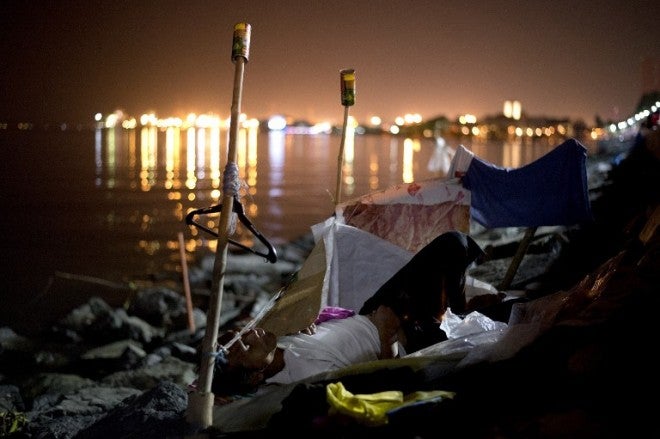 A homeless man sleeps along the Manila Bay on Saturday, Jan. 24, 2015. the House of Representatives will investigate the Department of Social Welfare and Development in connection with its hauling off hundreds of street children and homeless people to detention centers and beach resorts during the recent visit of Pope Francis to the Philippines. AFP PHOTO / NOEL CELIS

MANILA, Philippines–Despite explanations from government officials, the House of Representatives will investigate the Department of Social Welfare and Development (DSWD) in connection with its hauling off hundreds of street children and homeless people to detention centers and beach resorts during the recent visit of Pope Francis to the Philippines.

Quezon City Rep. Winston Castelo, chair of the committee on Metro Manila development, on Sunday said he was just waiting for the go-signal from the committee on rules to open the inquiry, to which Social Welfare Secretary Corazon Soliman would be summoned as principal resource person.

“We will not hesitate to conduct an investigation and get to the bottom of it. We will determine the legality and morality of this alleged attempt to cover up the true state of our socioeconomic status,” Castelo said in a text message.

Kabataan Rep. Terry Ridon will file a resolution Monday asking Castelo’s committee to compel Soliman to explain reports that the government took the “eyesores” from the streets of Metro Manila and kept them in municipal detention centers and resorts while the Pope was in the country.

Soliman has acknowledged that about 490 homeless families were taken off Roxas Boulevard and taken to Chateau Royale, a beach resort in Nasugbu town, Batangas province, for “training” financed from the DSWD’s “modified conditional cash transfer (CCT) program.”

She said the families were removed before the Pontiff arrived because they would have been “vulnerable to syndicates” and discrimination.

They were given training under a government program that would give 11,000 street dwellers rent-free housing for up to a year, she said. The unheard of program was launched last year, according to her.

She denied the homeless people were hidden from the Pope. “You cannot hide poverty. When the Pope landed, the first things he saw were the shanties by the river,” she said.

There is no river near Villamor Air Base, where the Pope’s plane landed on Jan. 15.

Backing up Soliman’s explanation, President Aquino’s deputy spokesperson Abigail Valte said on Friday that the DSWD was evaluating street dwellers to see if they were eligible for housing assistance from the government.

Valte said this was not the first time the DSWD took homeless families into the program, as it had been done twice before, when there were no visiting VIPs.

Still, no one was buying the officials’ explanations.

In an interview with radio dzBB anchor Rowena Salvacion, Rep. Emmi de Jesus of the women’s party Gabriela said she would ask the Commission on Audit (COA) to conduct a special audit to determine what funds were used for the “outing” of the homeless people.

“If it is proven that the fund came from the CCT, then this is anomalous. Her (Soliman’s) explanation that the trip merely coincided with the Pope’s visit is preposterous,” she said.

De Jesus said the militant bloc in the House would consolidate the resolution to investigate the banishment of the street dwellers and make privilege speeches condemning Soliman’s actions.

Soliman lamented the controversy that followed her department’s helping the homeless people. She said there was nothing wrong with letting homeless families enjoy a week’s stay in an expensive resort.

“They say we should all help the poor and when you help them and bring them to a place like that (Chateau Royale), you are asked why you brought them there. Where would we bring them? Don’t they deserve to be there?” Soliman said in an interview in Zamboanga City on Sunday.

She said her department spent P4.3 million for 490 families and staff members during the six-day “training.” It cost P1,193.50 per person a day, covering three meals, two snacks, the amenities and clean accommodations, she said.

Soliman said the President had been informed about the controversy.

Aquino’s instruction was “to keep explaining what you’re doing,” she said. “He said this is part of our regular program.”

Under the modified CCT program, Soliman said, the government aimed to keep families off the streets by training them how to live in a house.

In Metro Manila, a total of 2,479 families have been under the program since 2012, according to the DSWD.

During the orientation, basic literacy and life skills for the adults and character building for the children are discussed.

Also discussed with the adults are self-understanding and parenthood, differences between the sexes, and family relations, the DSWD said. The children are taught personal hygiene and values.

According to Soliman, there are three types of homeless people in Metro Manila—the victims of eviction and fire, who stay in the streets for a year or two, those displaced by conflict and disasters, and those who are unable to recover from these tragedies and give birth to a second or a third generation of street dwellers.–With a report from Julie M. Aurelio