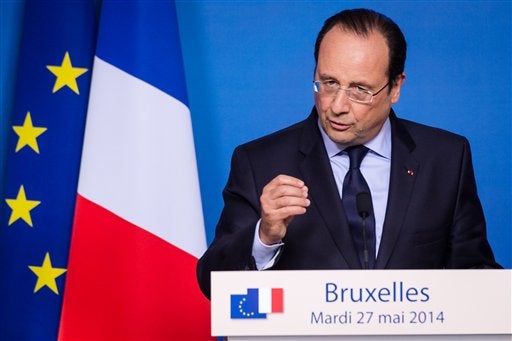 France’s President Francois Hollande addresses the media after an EU summit at the European Council building in Brussels, Tuesday May 27, 2014. Hollande has a busy evening planned for Thursday in Paris: a dinner with US President Barack Obama and later a “souper” with Russian President Vladimir Putin. AP PHOTO/GEERT VANDEN WIJNGAERT

MANILA, Philippines—On the historic first visit of a French head of state to the Philippines in February, French President François Hollande will be seeking the help of a country battered—but never defeated—by climate change.

France is turning to the Philippines as an ally for the environment in hopes of mobilizing the world toward climate action on the run-up to Paris’ hosting of the international climate talks, slated at the end of the year.

Hollande will be in the Philippines on Feb. 26 and 27, setting foot at the perennial ground zero of severe weather nine months before France’s hosting of the United Nations Climate Change Conference (COP21). The visit is expected to put a spotlight on the urgency of decisive international action.

“I believe the fact that the two Presidents—the Philippine President and the French President—can send a common message to the international community. It can be a symbol, even a spark that can mobilize will and bring us back to our senses and to reason,” said Nicolas Hulot, Hollande’s special envoy for the protection of the planet.

Hulot, who is in the Philippines until Sunday, is on a five-day trip to make arrangements for Hollande’s state visit and meet with Philippine officials, particularly those involved in environment and climate change policy.

“I thought it was important [to visit] at a time France will be hosting the conference. It is necessary to send a message to skeptics who deride climate change that there is a reality behind climate change, a history of families, of events,” said the special envoy in a press conference at the French Embassy in Makati late Friday afternoon.

Reciprocating President Aquino’s trip to Paris in September last year, Hollande’s visit would be “doubly historic” being a first-time trip for a French leader and one centered on climate change, Hulot said.

Speaking through an interpreter, Hulot said the Philippine-French partnership on climate change, to be firmed up during Hollande’s visit, would help “launch a common will to all countries in the world to make Paris a success.”

The Philippine visit is part of France’s global effort to bring together the negotiating countries on a unified front well ahead of the actual talks, set on Nov. 30 to Dec. 11.

“France is mobilizing its entire diplomatic corps to call on heads of state to make history in France, instead of simply resigning themselves to history,” Hulot said.

Strength in face of ‘Yolanda’

Hulot, a 25-year broadcast journalist specializing on the environment who was appointed to his mission two years ago, said Hollande chose to visit the Philippines at an opportune time because of the strength the country showed in the face of multiple disasters, particularly Supertyphoon “Yolanda” (international name: Haiyan).

“The Philippines, like other countries—and more than other countries—is a victim of climate change. But your country is not resigned in spite of the difficulties,” said Hulot.

The envoy also noted President Aquino’s speech last September in New York, where he told the world of the Philippines’ efforts to undertake resilience and adaptation measures in the face of natural disasters.

France aims to make history in its hosting of the contentious climate negotiations.

The goal: to reach the long elusive agreement among 195 nations for a legally binding pact to limit carbon emissions in hopes of “containing global warming” below 2 degrees Celsius.

Past this point, said Hulot, Earth’s increasing temperatures—primarily attributed to human activity such as the use of fossil fuel—would become irreversible, spawning fiercer storms and sea level rise.

“We ask very friendly countries, first of them is the Philippines, to join us in a joint declaration in this issue to mobilize countries in the world to reach an agreement as soon as possible,” said French Ambassador to the Philippines Gilles Garachon.

“Time runs very fast and faster and faster. We, the 195 countries, have to find together a solution. It’s not possible anymore to meet every year without reaching an agreement. We cannot postpone a solution,” he told reporters.

“There’s no better place than the Philippines to say that climate change consequences are terrible. It is not just an idea of scientists. Here, it’s there. We saw that in Typhoon Haiyan,” said the ambassador.

The 2013 monster storm, the strongest in history to make landfall, obliterated parts of Eastern Visayas and claimed the lives of more than 6,000 people.

Such death and destruction came just as world leaders met in Warsaw, Poland, for the 19th UN Climate Conference. Despite tearful pleas from the Philippine contingent and the support of other delegations, no agreement was reached that year.

France is determined to change this annual disappointing closing of the climate talks and urge the 195 nations, including major carbon emitters such as the United States and China, to face the “unprecedented challenge in the history of the international community.”

The French government has itself laid down a national plan to cut its greenhouse gas emissions by 2050.

“My role is to remind my partners whether in France, the Philippines, the United States or China that at the end of the conference in Paris, we will either be all winners or all losers,” Hulot said.

He also traveled to Tacloban City and Guiuan in Eastern Samar yesterday, areas badly hit by Yolanda, to check on recovery and disaster risk reduction efforts.

Hulot is also scheduled to visit Daanbantayan in Cebu today to visit resettlement sites called the “French Villages,” where 222 disaster-resilient homes will rise for typhoon victims with the support of French companies in the Philippines.