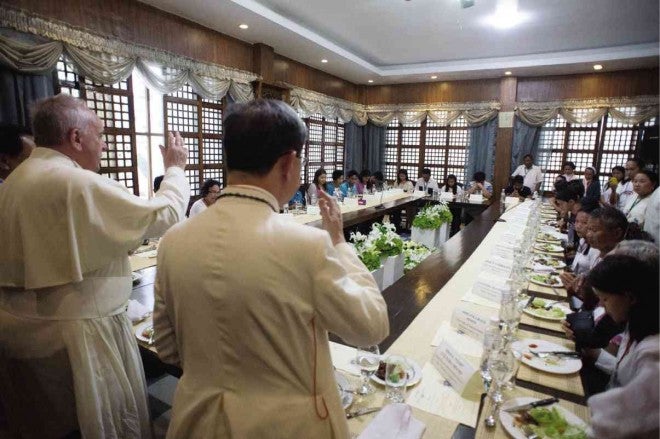 IN THIS handout picture released by the Vatican press office, Pope Francis (left) shares a meal with survivors of the 2013 earthquake in Bohol province and Supertyphoon “Yolanda” (international name: Haiyan) on Jan. 17 in Palo town, Leyte province, as part of his trip to the Philippines. Pope Francis braved heavy rain to celebrate a Mass for the weeping survivors of Yolanda, which killed more than 6,300 people in Leyte on Nov. 8, 2013. AFP/ OSSERVATORE ROMANO

PALO, Leyte—For about 20 minutes, 16-year-old Hazel Ballon forgot her grief as she received a reward of a lifetime when she met Pope Francis during lunch at the Archbishop’s Palace in Palo town, Leyte province, on Jan. 17.

“I could not really express what I felt at that moment. I mean, meeting a Pope never entered my mind,” said Ballon, among the youngest of 30 survivors of Supertyphoon “Yolanda” (international name: Haiyan) and the Bohol earthquake in 2013 who were invited to the meal.

Despite the rain and an approaching storm, the Pope kept his date with the survivors on the third day of his pastoral visit to the Philippines, capped by a Mass attended by a record of over six million people at Luneta Park in Manila. He left for Rome on Monday, embraced by a grateful predominantly Catholic nation.

At her young age, Ballon lost five members of her family when Yolanda, the strongest storm to make landfall in the world in recent history, unleashed her fury on Nov. 8, 2013. In just two hours, her grandmother, Cirila, 88; mother Marie Gina, 47; sister Emmlyn, 20, and brothers Gerone, 12, and Rogen, 11, were gone.

The teenager was then at the house of a relative, Cita Ballon, who also died, and was able to survive the rampaging storm surge by staying on the rooftop. More than 300 died in her village of San Joaquin in Palo.

Ballon, who does not know her father, said she saw only the remains of her grandmother. Those of her mother and her siblings were said to have been buried in the mass grave within the compound of the San Joaquin Parish Church.

The tragedy was too much to bear for the 16-year-old, who now lives with the family of Mary Anna Banguis, 39, a close friend of her mother, also in the village. She can only cry in silence to ease her pain and longing for her loved ones.

Somehow, her sorrow disappeared at the Archbishop’s Palace during the lunch with the Pope. “It was a moment I will forever cherish,” she said. 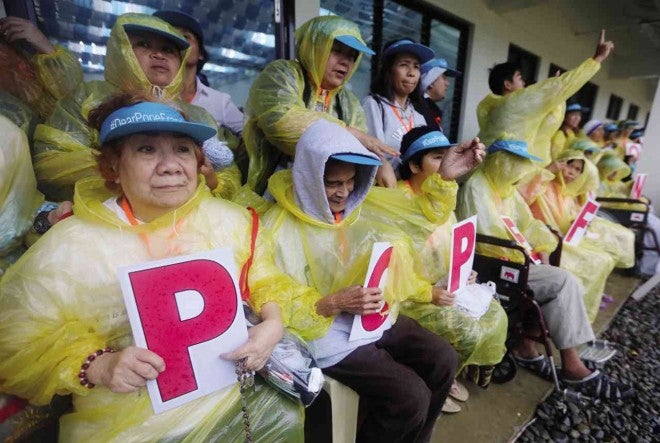 POPE Francis was unable to attend the full ceremonies at the Pope Francis Center in the Archbishop’s Palace in Palo, Leyte province, where elderly persons with cards spelling the Pope’s name waited for his arrival. The Pope left earlier for Manila due to a storm. LYN RILLON

She said she was first summoned to the archdiocese in Barangay Arado, also in Palo, in December last year and was “interviewed” about her storm experience. Later, she learned that she was to meet with the Pope and her name was submitted to the Church officials by village leaders.

The survivors were housed at the Pope Francis Center for the Poor on Jan. 15. The following day, they had their “practice” on how to eat with the Pope.

“They asked us to continue eating and stopped when we are talking with him and answer if he had some questions,” Ballon said.

Lunch with the Pope at the dining hall of the archdiocese lasted for 20 minutes. The survivors enjoyed the food, some of which were served to them for the first time.

Ballon, who was wearing pants and a white T-shirt with Pope Francis’ face on it, said she and the other survivors could barely eat, conscious of the presence of the world’s Roman Catholic leader in their midst. “When he approached us one by one, I felt cold and shivering. I kissed his ring,” she said.

“He asked for my name and how old I am as well as the names of my loved ones who died due to Yolanda,” she said. “He was like a ‘lolo (grandfather)’—very caring and loving. He looked at our eyes when he was speaking to us. We really felt his sincerity and that his facial expression turned sad when we shared our experiences.”

“He told us that he would pray for us but he also asked us to pray for him,” Ballon said. “After our meeting with him, I felt a big burden in me was lifted. I felt so light,” she said.

She said their meeting with the Pope was “very short,” though it was a fun atmosphere inside the dining hall. “I failed to get a selfie with him,” she giggled.

“We barely finished our meal and then he told us that he would be leaving,” Ballon said. “But we were told by a priest to just continue our eating,” she laughed, referring to Fr. Al Chris Militante, communications officer of the archdiocese, who took the seat occupied by the Pope.

The papal visit to Leyte, particularly Tacloban City and Palo, was supposed to take seven hours. It was cut short by almost four hours as Tropical Storm “Amang” was about to make landfall.

“But then again, it was really an experience of a lifetime. All of us shared our excitement and how it was meeting with Pope Francis,” Ballon said.

She said the Pope blessed the rosaries all of them brought as they also received an inspirational book titled “Straight from the Heart” from Militante.

Asked if she had any prayer said before Pope Francis, Ballon said she prayed that she could finish her studies and have her own business. She is a first year student at the satellite campus of Eastern Visayas State University in Tanauan town, also in Leyte, taking up business entrepreneurial.

Her school needs and monthly allowance are being shouldered by SOS Children’s Village, a nongovernment organization based in Tacloban, where the main campus of her school is based.

Banguis, who now acts as her guardian, said Ballon “has changed for the better.”

“Before, she was crying all the time,” the woman said. “She could now laugh and play with the kids around here.”

For the teenager, the short meeting with Pope Francis served as part of her healing process.