MANILA, Philippines—Marc Eric Lim, a ground crew officer of SkyLogistics, a company that works for Philippine Airlines, was the one who exchanged skullcaps with Pope Francis last 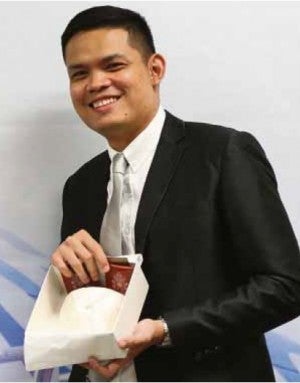 Videos of Lim offering a new skullcap to Francis and taking the one the Pope was wearing upon his arrival at Villamor Air Base from Tacloban City on Saturday afternoon went viral on social media.

“I planned it. But it was not scripted and I wasn’t that sure it would happen,” Lim said.

He said the idea of trading skullcaps was a suggestion from a priest friend while they were having lunch.

Lim said it was a longtime tradition among Catholics to swap skullcaps with the Pope.

He said he ordered a skullcap at a shop in Rome that made vestments for the Pope and had it shipped to Manila.

At Villamor Air Base, he said he stood at the “right place at the right time.”

“I called him ‘Padre Jorge, I have a gift coming from the Filipino people and the airport personnel taking care of your flights.’ When he heard that, he smiled and said ‘Si.’”

He took the skullcap from him and compared it in size with the one he had.

“I said in my mind, ‘Of course it would fit, that came from the same shop that made his zucchetto (skullcap),’” he told reporters, drawing laughter from them.

He said he could no longer remember Francis’ response as he was overwhelmed by intense emotions.

“It was a fleeting moment. My faith became stronger,” Lim said, adding that he would keep the Pope’s skullcap in his Manila home and make it a family heirloom.