Aquino told: Save BSP from Binay 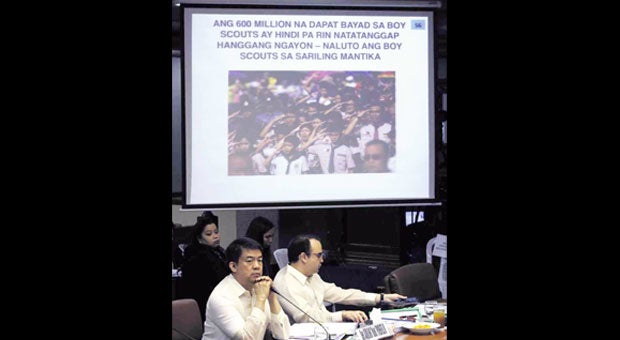 A former senior executive of the Boy Scouts of the Philippines (BSP) sent an SOS to President Benigno Aquino III on Thursday for him to protect the interest of the prestigious civic organization which counts among its members about two million schoolchildren in a land deal with developer Alphaland Corp. in which the BSP was allegedly grossly shortchanged.

“Mr. President [Aquino], let’s not neglect this organization. It serves the youth, youngsters we should be molding and preparing as future leaders of this country,” former Makati Vice Mayor Ernesto Mercado said at the resumption of the Senate inquiry into charges of corruption against Vice President Jejomar Binay, BSP president for 20 years.

Mercado, a former BSP senior vice president, noted that Mr. Aquino was the country’s Chief Scout. “Whoever is the president of any country, prime minister or the highest official is designated the Chief Scout,” the former vice mayor said.

Mercado claimed that Binay got some P200 million in kickbacks from the land deal. Binay and Alphaland have denied the allegation.

In a case of frying the BSP in its own fat, Alphaland mortgaged BSP’s Makati property for P1.7 billion so it could use the funds to develop it, the former Makati official said.

“When we were visited by the good Pope, I heard him say: ‘Stop corruption and protect the youth.’ I was challenged by that. That’s why this morning, I am making this presentation,” he said at the resumption of the inquiry into charges of corruption against Binay.

Mercado said the BSP had been selling its pieces of property in Pasig, Manila, Makati and Davao cities and Los Baños in Laguna under the watch of Binay.

For doing this to Boy Scouts across the country, Mercado vowed to file plunder charges against members of the BSP’s national executive board and Alphaland executives.

“… I will file a case in the Ombudsman and if it’s necessary, I’ll go to civil courts because at stake here are the interests of the Boy Scouts,” he said.

A BSP official last night maintained there was nothing anomalous in the joint venture agreement.

He said the BSP national executive board and national council would not allow the integrity of the institution to be tainted with irregularities.

Avisado said that the joint agreement signed by the BSP and Alphaland was carefully studied by the 45-member national executive board and approved by the national council.

Sen. Antonio Trillanes IV challenged Binay to order an investigation of Mercado’s charges if he had no hand in them.

“He should order a thorough investigation using all instruments of government,” he later told reporters. “If he’s not involved, he would have the agreement nullified.”

Sen. Alan Peter Cayetano agreed: “We will give him (Binay) courtesy to answer all this.”

In a PowerPoint presentation, Mercado provided a timeline of the transactions between the BSP and Alphaland on the development of the property on Ayala Avenue Extension and Malugay Street.

In June 2008, Alphaland and the BSP entered into a joint venture agreement to develop the property, in which Alphaland as the developer would acquire rights, title and interest in 85 percent of the gross floor area, and the BSP, as landowner, 15 percent.

Mercado, then BSP senior vice president, said he opposed the sharing, and pushed for 20-percent share for the BSP, but was overruled by Binay.

Quoting Binay’s aide Gerardo Limlingan, the former vice mayor said that 5 percent, a fourth of the 20 percent, represented Binay’s share to fund his election campaign, and for which the latter got an initial P189 million.

To escape responsibility, Binay asked Mercado to sign the agreement because he was leaving for abroad, opposite Oreta, he said.

“After the signing, I talked to Oreta and Limlingan to ensure the welfare of the Boys Scouts. But Babes Oreta told me not to worry, and that he and Gerry Limlingan would take care to hide VP Binay’s share because he has his own company—Noble Care Management Corp.,” the former Makati official said.

In the next slide, he showed that Oreta was the chair and president of Noble Care, which was incorporated in 2005.

After two years, Alphaland bought back Noble Care’s shares for P88.973 million, and wrote off its P100.4-million loan, or a total P189 million.

This amount became Binay’s “initial kickback,” Mercado said. All these transactions were carried out during Binay’s birthday on Nov. 11, 2010.

After severing his ties with Binay in 2009, Mercado said he also learned that Alphaland mortgaged BSP’s property to the Development Bank of the Philippines in March 2010 so it could get P1.7 billion.

“In effect, Boy Scouts entirely financed the project,” he said. “This is how VP Binay and Alphaland started frying Boy Scouts in its own fat.”

If he had not made such discoveries, Mercado wondered: “Where would the P2.4 billion go?” He was referring to the current value of the property, less the kickbacks that allegedly ended in Binay’s pockets.

“To the members of the [BSP] national executive board, I would like to apologize to you. I will include you, as well as the officials of Alphaland, in the plunder case I will file because I want the truth to come out,” he said.

Trillanes told reporters that Binay should be included in the plunder complaint to be filed by Mercado.

Mercado also discovered that in June 2011, the joint-venture agreement he had signed with Alphaland was amended to authorize the sale of BSP’s property to Alphaland, and the investment of BSP’s P600-million fund into the project.

“This is the point where the Boy Scouts of the Philippines was fried in its own fat,” he said.

“The big question is, how come the land’s value was still pegged at P600 million? Since it has been reclassified, it should have doubled to at least P1.2 billion,” he added, referring to its 2008 reclassification from industrial to commercial and mixed use.

Mercado said the Commission on Audit (COA) observed that the BSP had not collected its money from the deal.

He said that COA asserted its jurisdiction over the BSP in 1999, but Binay argued against this, saying it was detached from government. In 2011, the Supreme Court ruled that the BSP was a public instrumentality, and subject to audit. Its first audit was conducted in 2012.

In 2012, Makati, under Mayor Jejomar Erwin “Jun-jun” Binay, approved Alphaland’s master development plan to upgrade the development of the property from FAR 8 to FAR 12.

FAR, or floor area ratio, is defined as the allowable total floor area of a structure with respect to the available lot space.

“While VP Binay and the Makati City government gave Alphaland all the concessions to further profit from this project, the Boy Scouts’ share in the project became smaller,” Mercado said.

In 2013, Mercado claimed that Alphaland “unilaterally” decided to reduce the BSP’s 15-percent share from Towers 1, 2 and the Podium to only Tower 3 and the Podium.

Towers 1 and 2 are intended for sale, while Tower 3 is for lease, he said.

“VP Binay cornered 5 percent from the Alphaland deal to use it in the 2010 election. This 5 percent has initially reached P200 million, while the Boys Scouts has not received a single cent,” Mercado said.

“The Boy Scouts lost a (piece of) land because VP Binay asked Alphaland to sell it. They have not received the P600 million until now,” he added.

Avisado said it was only Mercado who was claiming that there was an irregularity in the land deal through the alleged 5-percent in kickbacks that Binay got from the transaction.

“That is just a pure allegation (against Binay) and BSP has nothing to do with it,’’ Avisado said, adding that Mercado has to prove his allegations against Binay through “competent evidence.’’

He said the BSP, 93 percent of whose members are students, was caught in the crossfire of the fight between Mercado and Binay.

Avisado said he did not like that Mercado was trying to show that the BSP got a bad deal from the transaction.

Explaining the joint venture agreement, he said that Alphaland’s share was 85 percent while the BSP, a 15-percent share.

Avisado said its 15-percent share of the BSP in the joint venture was equivalent to the P600-million appraised value of its land in 2008 that Alphaland was now developing.

He said the value of BSP’s investment had grown to P900 million after the floor area ratio was increased by Alphaland. “So we did not lose.’’

Avisado said that through the 15-percent share, the BSP would determine what to do with the property for its benefit.

This meant that the BSP could decide to rent out, sell or have the developed property managed by someone, he said.

He said that Mercado’s claim that BSP’s share in the joint venture became smaller was not true because this would go against the agreement signed in 2008.

Asked to comment on Mercado’s claim that BSP had not received a single centavo from Alphaland, he said that since January last year the company had been paying a monthly rental of P530,000 for occupying the third floor of the already constructed Podium.

At the Senate hearing, Mercado also told the subcommittee that Binay also carried out his own Charter change at the BSP to stay on as its president up to now.

Binay initially served as national president from 1998 to 2000. After re-assuming the post in 2001, when its then president Robert Pagdanganan ran for the Senate, he “maneuvered” to lift the two-year term limit of the president, he said.

“Binay also did a Cha-cha at BSP so he would stay on in his post,” he said.