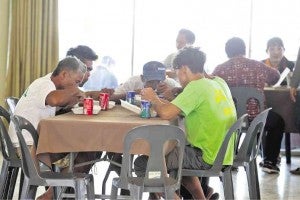 SOME of the fishermen rescued by the Palawan police eat their lunch in a budget hotel in Cebu City after their ordeal.
JUNJIE MENDOZA/ CEBU DAILY NEWS

CEBU CITY—A fish trader and his recruiter are facing charges of human trafficking after they allegedly forced 78 fishermen from Bohol and Cebu to work without pay.

Ramil Noval and Yulo “Boy” Plecerda, both from Lapu-Lapu City, were accused of violating the Expanded Anti-Trafficking in Persons Act of 2012 (Republic Act 10364) particularly its provision against “forced labor and slavery.”

The complaints were filed at the Lapu-Lapu City prosecutor’s office on Thursday based on affidavits executed by the fishermen, who were rescued on Tuesday in Palawan, said Prosecutor Liceria Lofranco-Rabillas, an official of the Inter-Agency Council Against Trafficking.

Plecerda, also a fisherman, was arrested on Wednesday while escorting the 26 fishermen to Cebu. The fishermen identified him as their recruiter. The 52 other fishermen were from Bohol.

Noval, who owned the commercial fishing boats where the fishermen worked, remained at large.

Senior Insp. Ma. Theresa Macatangay, head of the Regional Anti-Human Trafficking Task Force, said the 26 fishermen from Cebu were recruited by Plecerda in Lapu-Lapu City in October 2014. Each was given P7,000 during their first meeting and another P8,000 in November.

Thinking that they would get ample pay in Palawan, the fishermen went with Plecerda. Of the 26 fishermen from Cebu, 23 are from Lapu-Lapu City, two from Cordova town and one from Tuburan town. The oldest is 59 years old and the youngest, 19.

But when they arrived in Palawan, they were told that they have to each pay P60,000 to their employer, Noval, for board and lodging.

Investigation showed the fishermen were made to use an illegal fishing method called pa-aling which requires the fishermen to dive into the water and use air compressors with tubes to drive fish to the surface.

Local environmental groups have been pushing for a nationwide ban on pa-aling, saying it is risky for fishermen and leads to overfishing.

One of the fishermen said Noval would punch them if they failed to get enough fish.

For about two months, the fishermen stayed in their boats in the seas off Palawan.

A larger boat, he said, would take all their catch which would be sold by Noval to Cebu.

One of the rescued fishermen, said his 24-year-old brother had remained missing since December when Noval told him to go fishing despite the bad weather.