MANILA, Philippines—Commission on Audit (COA) chief Grace Pulido-Tan considered it her legacy that the commission led the audit on lawmakers’ public funds that resulted in the probe over the pork barrel scam. 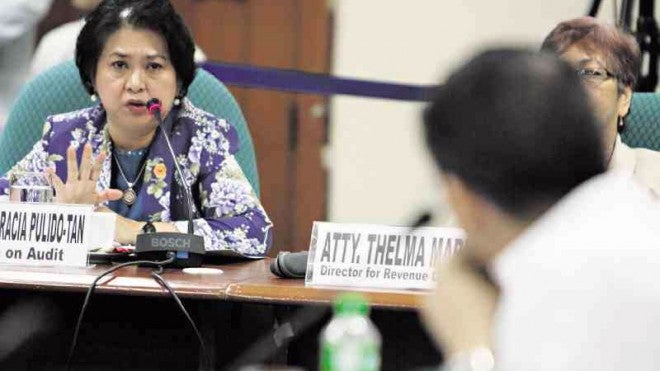 In summing up her term, Tan expressed her gratitude that the public will remember her leading the audit report on lawmakers’ Priority Development Assistance Funds (PDAF) from 2007 to 2009.

The special audit report became the basis for the filing of plunder charges against three senators detained over the alleged corruption of their PDAF to ghost projects for kickbacks under the scheme of Janet Lim-Napoles.

“It was a groundbreaking work. It had such great impact on governance, society and people. If that’s what people will remember me for, thank you,” said Tan, who will be vacating her office on February 2 after almost four years in service.

She said the commission is set to release another special audit report, this time covering 2010 to 2013, not just on the PDAF but also on the Disbursement Acceleration Program (DAP), the administration’s savings-impounding mechanism considered the presidential pork barrel by critics.

The Supreme Court junked the PDAF and some practices under DAP at the height of public outcry over alleged corruption.

“We are in the process of consolidating the findings on PDAF as well as on the DAP,” Tan said.

The country’s top auditor lamented the patronage politics that she claimed caused the pillaging on public funds that could have been used for basic services.

“The PDAF is not evil in itself. It was in the way it was used … Probably we would have better basic services,” Tan said.

Tan said she had no plans to take up another government position. She had been eyed as a Supreme Court Associate Justice but it was Solicitor General Francis Jardeleza who took the vacant post.

The top auditor said she was looking forward to try gardening after her term.

“No plans, really. I just want to relax, do all the things I missed doing. Gardening. I am not inclined to take a position at this time,” Tan said.