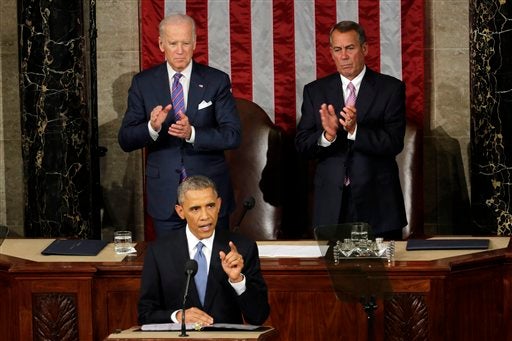 Vice President Joe Biden and House Speaker John Boehner of Ohio applaud President Barack Obama, on Capitol Hill in Washington, Tuesday, Jan. 20, 2015, during his State of the Union address before a joint session of Congress. AP

WASHINGTON — President Barack Obama’s State of the Union address marked a sweet spot in his presidency when economic signs and his own personal approval are on the rise. He made sure to capitalize, taking credit for policies he said raised the country out of its recession.

But sweet spots are by definition fleeting — moments in time that can just as quickly sour.

Tuesday’s speech capped a remarkably activist 11 weeks since Obama suffered the humiliation of Democratic losses that gave Republicans control of both chambers of Congress. But this was not a lessons-learned address.

Instead, Obama drew lines in the sand that cautioned against Republican overreach. And while he offered a nod to bipartisanship on issues such as trade, he pushed a traditional Democratic economic agenda of tax increases for the rich, expanded paid leave for workers and increased aid for education.

For a president two months removed from a devastating political loss, this was not a speech uttered in retreat. Instead, he brashly wagged his finger at his critics.

“At every step, we were told our goals were misguided or too ambitious; that we would crush jobs and explode deficits,” he said. “Instead, we’ve seen the fastest economic growth in over a decade, our deficits cut by two-thirds, a stock market that has doubled, and health care inflation at its lowest rate in 50 years.”

The White House is betting that by promoting the economic successes, Obama can boost his governing credibility. By laying credit at the doorstep of his own administration, Obama is looking to gain leverage over Republicans and weaken their resolve to undo his go-it-alone initiatives on Cuba, immigration and climate change.

It is a better bet today than it was last year or the year before that. But the global economy remains fragile and while the US is better positioned to withstand overseas pressures, it is not immune.

Europe is still wrestling with economic stagnation and questions remain about the fate of its shared currency, the euro. China’s once exploding economy is slowing. Oil prices could bounce back up if OPEC nations decide to decrease production. And for all the improvements, the US economy still has room to improve. Nearly 7 million people are working part-time but would prefer full-time work. Participation in the labor force dropped to a low of 62.7 percent. Some weaknesses predate the Great Recession; over more than three decades, productivity has increased but wages have stayed flat.

Still, the moment is for now Obama’s to exploit.

A Washington Post-ABC News poll released Tuesday showed Obama with an approval rating of 50 percent, the poll’s highest rating for the president in more than 18 months. Other polls also showed Obama’s approval rising, though not as high. But the Post-ABC poll shows that Obama’s better standing is largely the result of support coalescing among the groups that backed his presidential campaigns in the first place — Democrats, moderates, Hispanics and younger people.

Cheaper gas, lower unemployment, a strong stock market no doubt have contributed to the good feelings. So have issues that Obama has pushed that appeal to those groups, including his executive action to shield more than 4 million immigrants living illegally in the U.S. from deportation and his call for free community college for all.

But the success of Obama’s remaining two years also depends on his relations with the ruling Republicans in Congress. Obama cited trade as one of the most prominent topics that could attract bipartisan support. The president is seeking “trade promotion authority,” or the ability to negotiate trade deals that Congress can either approve or reject but not change. He wants that in order to conclude two major commerce agreements — one with Europe and one with countries on the Pacific rim.

That’s where Democrats and his allies in organized labor abandon him. To succeed Obama is going to have to apply pressure on his friends and risk taking a hit on his own approval ratings. It won’t be easy. “Trade agreements or boosting wages? We can’t do both,” the liberal Economic Policy Institute declared Tuesday.

So far, Obama and the Republicans have stayed in their own corners, swinging at each other from a distance. Republicans began the year by seeking to undo Obama’s immigration initiative, weaken provisions in the 2010 financial regulations law, and force approval of the Keystone XL oil pipeline from Canada. Obama countered with seven veto threats in quick succession, including two on the very day of his State of the Union address.

“Divided party government is always tough on a president,” said American University presidential scholar James Thurber. It is even worse during the last two years of a presidency. “You’re really a double lame duck.”