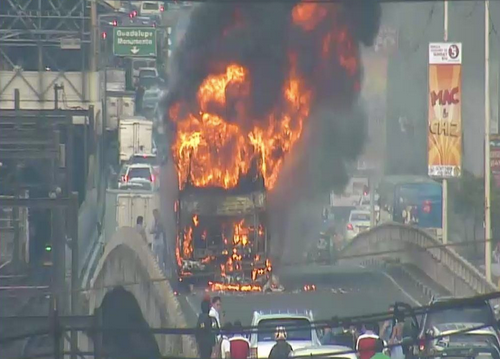 Bus catches fire on Edsa. Photo tweeted by the MMDA.

MANILA, Philippines–A bus on the northbound lane of Edsa caught fire on Wednesday, the Metropolitan Manila Development Authority said in an advisory.

The MMDA said a Manrose bus caught fire at 4:45 p.m. while traversing Edsa near Ayala Avenue.

Motorists were warned of heavy traffic along Edsa northbound.

Meanwhile, operations of the Metro Rail Transit (MRT-3) were temporarily stopped as a precautionary measure since the accident happened near the train’s railway and may affect its wirings, a radio dzMM report said.

Bus catches fire along EDSA, no one hurt—report