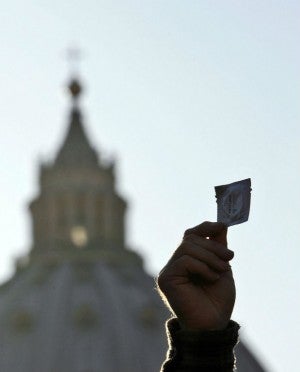 In this March 23, 2009 file photo, St. Peter’s Basilica is seen behind a hand of a demonstrator holding a condom, on the edge of the Vatican’s St. Peter’s Square, in Rome. During his return from The Philippines, Monday, Jan. 19, 2015, Pope Francis showed his more conservative side by upholding church teachings on contraception, and saying that Catholics don’t have to breed “like rabbits” and should instead practice responsible parenting. AP

BERLIN, Germany — The pope’s comment that Catholics don’t have to breed “like rabbits” has caused offense — among Germany’s rabbit breeders.

Pope Francis said Monday that Catholics should instead practice “responsible parenting” and use Church-approved forms of birth control.

But Erwin Leowsky, president of the central council of German rabbit breeders, told news agency dpa on Tuesday that only rabbits which live in the wild are sexually overactive.

He said those in captivity have tamer reproductive habits.

Leowsky says he feels the pope should allow Catholics to use contraception rather than resorting to misleading cliches about rabbits.