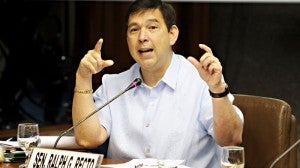 MANILA, Philippines – While he said he is open to accept the support of anyone or any group, Senate Pro Tempore Ralph Recto made it clear on Tuesday that he would not abandon the administration’s Liberal Party (LP) for another political group.

“Wala akong balak na lumipat. I don’t see that,” Recto told reporters when asked if he would jump ship amid speculations that he was being considered to run under the senatorial ticket of Vice President Jejomar Binay.

The senator said he was not aware of any talk about him running under Binay’s ticket, saying he has not received any invitation to join the Vice President’s camp.

When asked if he was open to the idea, Recto said: “I am with the Liberal Party. You will know naman e at the proper time.”

But he was quick to add that he would “accept all parties who will assist me and my campaign.”

Recto also reiterated that his wife, Batangas Governor Vilma Santos, has no plans to run for any position in 2016.

“She’s not interested to run for any position…as of now. I don’t see her changing her mind though,” he said.

The senator said his actor-son, Luis, has not also decided yet whether to run for public office, adding that he would rather see him settled first before joining politics.

“Angel is fine with us,” Recto said of his son’s girlfriend, actor Angel Locsin.