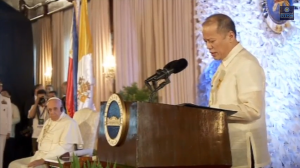 President Benigno Aquino III speaks before an audience composed of Pope Francis, politicians and members of the diplomatic corps. Photo courtesy of the Official Gazette.

“I think it was uncalled for. It was not the proper venue to blurt out his feelings toward the church leaders, as the Pope came to Malacañang as a state visitor,” Ejercito, an opposition member, said in a text message to reporters on Tuesday.

“I wish he (Aquino) could have acted more statesman-like,” he added.

In front of the Pope last Friday, the President blasted the local clergy for criticizing him and his administration but kept silent on the alleged abuses committed during the past administrations.

“In contrast to their previous silence, some members of the clergy now seem to think that the way to be true to the faith means finding something to criticize, even to the extent that one prelate admonished me to do something about my hair, as if it were a mortal sin,” Aquino lamented.

The President found an ally in Senator Vicente “Tito” Sotto III, who also belongs to the minority bloc in the Senate.

“The President was merely exercising the freedom of speech. The same way that the clergy does when they criticize government,” Sotto said in a separate text message.

Popemobile on way to the Vatican