Should the ARMM be replaced by another entity? MNLF factions’ views differ | Inquirer News

Should the ARMM be replaced by another entity? MNLF factions’ views differ 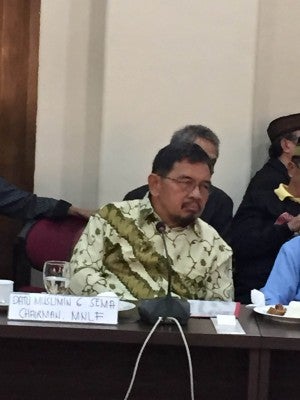 MANILA, Philippines — While they have a united stand on independence, two factions of the Moro National Liberation Front (MNLF) differed on their views on several points of the Bangsamoro basic bill (BBL) particularly on the creation of another entity and its leadership.

Much like their conflicting views on the leadership over the Moro separatist group, the MNLF factions Alonto and Sema also disagreed on their stands on the bill that seeks to create a Bangsamoro entity to replace the Autonomous Region in Muslim Mindanao (ARMM).

During the Bangsamoro ad hoc committee hearing in the House of Representatives Tuesday, Muslimin Sema, chairman of their MNLF faction, said the Bangsamoro people stand to lose the gains under the ARMM if the law creating the autonomous region is replaced with a new political entity.

While he did not oppose outright the creation of the Bangsamoro bill, he said the current form of the bill will disregard the gains under the ARMM law.

“Despite the bitter branding in our foreheads, we remain firm that we will not set aside all that we have gained in the last 40 years. How can we achieve that in the current order of things?” Sema said.

“Moreover, the idea of repealing the current organic act and putting in place a totally new law means our people will go back to square one, on a system that is totally new to us…” he added.

Sema, however, said their faction was not in the hearing to reject outright the Bangsamoro bill.

“The MNLF did not come here… to register our rejection as well as our acceptance of the Bangsamoro Basic Law,” he said.

Sema clarified though that the Bangsamoro bill “in its current form… is a recipe for disintegration of the current autonomous region unless our perspective on this matter is taken with a grain of salt.”

“The way the BBL is written we are bound to lose what we have gained in the last four decades of our people’s struggle,” Sema said.

For his part, Abul Khayr Alonto, chair of their MNLF faction, said the Aquino administration had earned the Bangsamoro people’s trust for long-lasting peace in Mindanao.

“(The) Aquino government has committed to this peace process and had earned the trust of the Bangsamoro people… BBL can be an instrument of peace,” Alonto said.

He said he hoped his son will not grow up to be where he is now still defending the bill.

“If the House (and the) Senate cannot do this, I pray to God that my son will not be back here talking on the same issue,” he said.

Alonto said their faction supports the bill to finally end the decades of war in Mindanao. 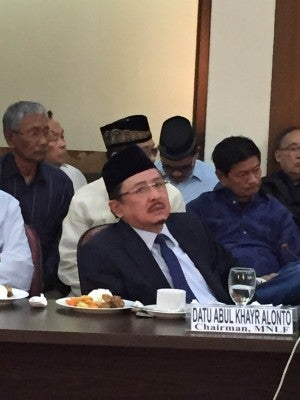 “We will fight not with arms but through a peaceful democratic process,” he said.

Alonto even supported amending the 1987 Constitution if need be just so to pass the bill. The Bangsamoro bill is hounded with issues of constitutionality for its intent to give political autonomy in Mindanao.

“What we heard are bickering statements of interests by different groups,” Biazon said.

The two factions quickly reacted and said they are united in their position for a just and lasting peace in Mindanao.

“We have been united. When we talk of independence, it is in every heart of every Moro people,” Sema said.

“There (are) no differing interests. We are united,” he added.

“If unity cannot be achieved in a strictly unity system then let us revert back to unity in diversity. Let us forge that unity,” he said.

“We are one in the pursuance of the right to self-determination,” he said.

Noticeably absent was MNLF founder Nur Misuari, who was ousted as MNLF chair at the height of leadership problems which divided the Moro separatist group.

Misuari, chair of his own MNLF faction, faces an arrest warrant for leading a failed siege in Zamboanga City on September 2013 in an independence bid. He has since been in hiding.

The House is conducting consultations over the bill that seeks to replace the Autonomous Region in Muslim Mindanao with a new Bangsamoro entity and end decades of Muslim secessionist movement in the region.

Once the bill is passed, it would have to go through a plebiscite for ratification.