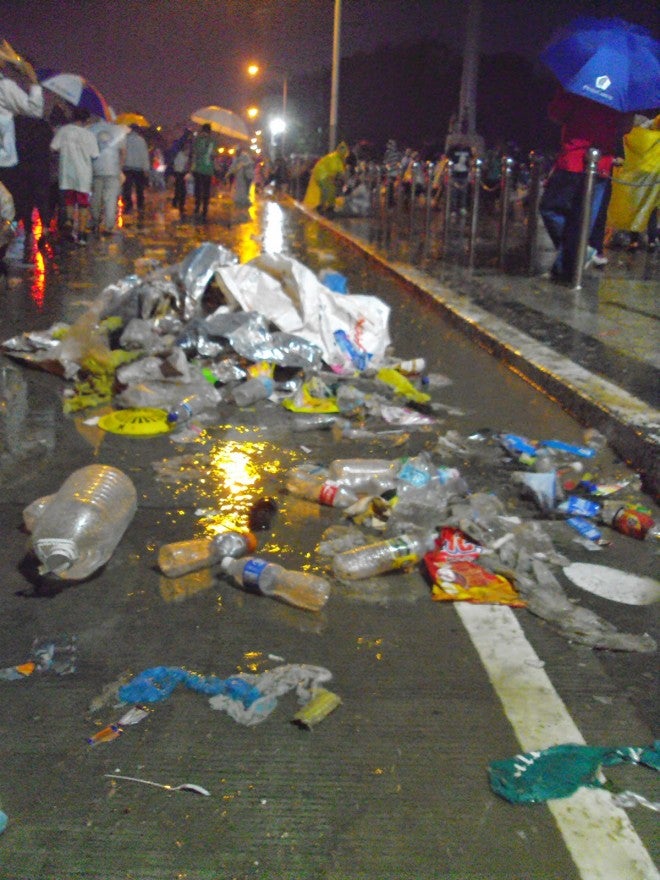 MANILA, Philippines – Pope Francis’ message to the people about caring for the environment has yet to sink in the hearts and minds of the Filipinos, an environmental watchdog said as the group deplored that Rizal Park was left awash with garbage after the Mass officiated by the pontiff himself.

“We are sad to see such a low regard for the environment at a Holy Mass officiated by Pope Francis, the ‘green pope’ and participated in by millions of Filipinos led by President Benigno Aquino III who, the irony of it all, had proclaimed the month of January as the first-ever ‘Zero Waste Month,’” said Aileen Lucero, Coordinator, EcoWaste Coalition in a statement Monday.

Lucero said the country’s premier park was left wrapped in trash “incompatible with a holy celebration that left eco-volunteers and government workers busy cleaning up the mess.”

“Oddly, we even found some garbage piles with discarded tarpaulin reminders on top with a quote from Pope Francis that says ‘Let us be protectors of God’s creation and of one another,’” she noted.

“We hope that the undistributed Missalettes have not gone to the dump, but were duly retrieved by church personnel for sharing with others or by waste pickers for recycling,” Lucero said.

At his encounter with the youth at the University of Santo Tomas, the Pope, in his prepared but undelivered speech, called on young people “to make a contribution in showing concern for the environment.”

“As stewards of God’s creation, we are called to make the earth a beautiful garden for the human family,” the pontiff said. This message would again be heard in his homily at the concluding Mass where he said, “He created the world as a beautiful garden and asked us to care for it.”

“Regrettably, Rizal Park was turned into an unsightly garden with trash strewn all over the area. Even the national hero’s monument was not spared,” Lucero lamented.

She said bishops, priests and the faithful should do a serious thinking of how to instill to the people the teachings of the Pope about the environment.

The group is hoping that Pope Francis’ reminder that we should “take good care of creation” should not be forgotten as Catholics reflect over the lessons from the Papal visit.