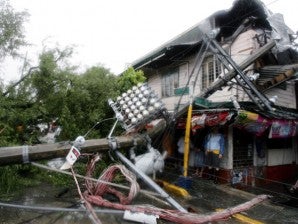 FALLEN POST. An electric post falls on top of a house in Antipolo Street, Sta. Cruz, Manila at the height of Typhoon Pedring on Tuesday, Sept. 27, 2011. NINO JESUS ORBETA/INQUIRER

MANILA, Philippines – The death toll in the Philippines from Typhoon “Pedring” (international codename: Nesat) climbed to 18 Wednesday as the government rushed to restore lifelines ahead of another storm churning to the east of the country.

“We are focusing on trying to get power and telecommunications services today, and work crews have also fanned out to repair and clear 61 road networks across Luzon damaged by landslides, debris and floods,” Ramos told Agence France-Presse.

At the height of Pedring’s fury Tuesday, dramatic storm surges in Manila Bay crashed over seawalls, flooding a hospital, a five-star hotel and the US embassy.

Parts of Luzon remained under waist-deep flood waters Wednesday after the government released waters from four dams that had reached critical levels in Bulacan province, about an hour’s drive north of Manila.

More than a million people in Luzon remained without power Wednesday, including some areas in the capital Manila and seven outlying provinces, according to Ramos.

He said intermittent rain from Pedring’s tail slowed down work crews Wednesday, with the typhoon now in the far northwest of the Philippines and expected to move into the South China Sea later in the day.

Meanwhile, the state weather bureau said a tropical storm brewing in the Pacific Ocean and heading for Luzon would likely hit land within the week, adding to the misery for the 48 million people living on the island.

“We need to finish emergency work in the aftermath of Pedring before this storm comes,” Ramos said.

“We are praying for the skies to clear a little bit today.”