Palace thanks telcos for helping ensure safety of Pope Francis 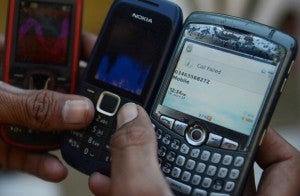 MANILA, Philippines–Malacañang on Monday acknowledged the help and cooperation extended to the government by the country’s telecommunication companies in ensuring the safety of Pope Francis during his Jan. 15-19 visit.

Globe Telecommunications, Smart Communications and Sun Cellular cut signals on areas where the Pope held an event as well as the routes which he took to go to a particular event. Regular service resumed only after the Pope had left the areas.

The networks sent advisories to their subscribers to apologize for the inconvenience, saying they were complying with the orders from the National Telecommunications Commission (NTC).

“We thank the telecommunications companies for their cooperation in ensuring security for all and advising the public accordingly,” Palace Spokesperson Edwin Lacierda said in a statement.

Pope Francis has stayed in the country for five days.

Prior to his arrival, at a press conference on board Sri Lankan Airlines flight ALK4111 that brought him from Colombo to Manila,  he admitted being concerned about alleged threats to his security during his visit to the Philippines.

Last year, the Pope received threats from some fundamentalists belonging to the Islamic State.