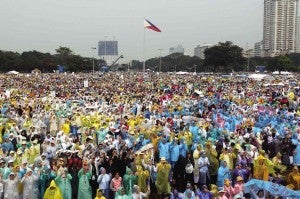 FOR LOVE OF FRANCIS Oblivious of pelting rain brought by Tropical Storm “Amang,” millions of Filipinos hear Mass celebrated by Pope Francis at Rizal Park on Sunday at the conclusion of his four-day apostolic visit to the Philippines. Authorities estimated the crowd at 6 million to 7 million, surpassing the 5 million attracted by St. John Paul II’s final Mass for World Youth Day celebrations at the same venue in January 1995. JOAN BONDOC

MANILA, Philippines–Pope Francis on Sunday concluded his apostolic visit with a pastoral message in his final Mass attended by an estimated 6 million Filipinos who beat their own record of love for the world’s largest papal gathering: Find your identity as God’s children in the Sto. Niño, and thereby, cherish each child and protect the family.

The Pontiff hailed the Philippines as the “foremost Catholic country” in Asia whose citizens have a vocation to be “missionaries of faith” in the region.

Celebrating his concluding Mass at Manila’s Rizal Park before euphoric Filipinos on the rain-drenched Feast of the Holy Infant, the Pope wove his homily around the symbolic message of the Holy Child.

“In these days, throughout my visit, I have listened to you sing the song: ‘We are all God’s children.’ That is what the Sto. Niño tells us. He reminds us of our deepest identity. All of us are God’s children, members of God’s family,” he said.

Citing the day’s second reading from St. Paul, Francis said that “in Christ, we have become God’s adopted children, brothers and sisters in Christ.”

“This is who we are. This is our identity. We saw a beautiful expression of this when Filipinos rallied around our brothers and sisters affected by the typhoon,” he added, referring to 2013 supertyphoon.

The torrential rains had left many in the crowd wet, cold and freezing.

Manila officials and the Vatican said a record 6 million people attended the Pope’s final Mass and lined his motorcade route.

The chair of the Metropolitan Manila Development Authority, Francis Tolentino, said a record 6 million people attended the final Mass. The Vatican spokesman, the Rev. Federico Lombardi, said the Holy See had been told by local officials that the figure was between 6 million and 7 million.

Officials had hoped that the number of people attending the Mass would surpass the 5 million who turned out for St. John Paul II’s final Mass in the park 1995.

“Based on our monitoring of the crowd in Luneta and the people along the streets, the number of people who attended the Pope’s Mass was definitely bigger than during the 1995 Mass of Pope John Paul II,” said a senior government official involved in the security operations.

“Easily, the crowd reached more than 6 million during the Mass. That number includes those who watched the Mass on the streets where we set up giant LED screens,” he said.

Before beginning the multilingual Mass, highlighted by music fusing the country’s many languages and musical rhythms, the Pontiff blessed an image of the Holy Infant, even as the faithful held up their own images.

The Pope said the image of the Holy Child Jesus accompanied the spread of the gospel in the Philippines from the beginning.

“He continues to remind us of the link between God’s kingdom and the mystery of spiritual childhood,” he said, proceeding to quote from the Gospel of Mark: “Whoever does not accept the kingdom of God like a child will not enter it.”

“The Sto. Niño continues to proclaim to us that the light of God’s grace has shone upon a world dwelling in darkness, bringing the Good News of our freedom from slavery, and guiding us in the paths of peace, right and justice,” he added.

At the same time, the Holy Child “reminds us of our call to spread the reign of Christ throughout the world.”

And yet because of the devil’s distractions, “promise of ephemeral pleasures and superficial pastimes, such as ‘tinkering with gadgets,’ we forget to remain, at heart, children of God,” Francis said.

“For children, as the Lord tells us, have their own wisdom, which is not the wisdom of the world. That is why the message of the Sto. Niño is so important. He speaks powerfully to all of us. He reminds us of our deepest identity, of what we are called to be as God’s family,” he said.

“The Sto. Niño also reminds us that this identity must be protected. The Christ Child is the protector of this great country,” he continued.

While the Mass carried the theme of mercy and compassion, the Pope harped on the Holy Child’s contemporary message to this developing country of 100 million Filipinos.

Before President Aquino, Vice President Jejomar Binay and millions of Filipinos, the Pontiff said the Christ Child “is the protector of this great country” and so every child and his family must be protected.

“In the Gospel, Jesus welcomes children, he embraces them and blesses them. We too need to protect, guide and encourage our young people, helping them to build a society worthy of their great spiritual and cultural heritage,” he said.

“Specifically, we need to see each child as a gift to be welcomed, cherished and protected. And we need to care for our young people, not allowing them to be robbed of hope and condemned to life on the streets,” he added.

After all, it was a “frail child, in need of protection, who brought God’s goodness, mercy and justice into the world,” said the 78-year-old Francis.

“He resisted the dishonesty and corruption, which are the legacy of sin, and He triumphed over them by the power of His cross,” he added.

Too, the Child Jesus was threatened when he was born, but was protected by St. Joseph, and so he “reminds us of protecting our families,” such as the Church, God’s family, the world and human family, the Pope said.

“Sadly, in our day, the family all too often needs to be protected against insidious attacks and programs contrary to all that we hold true and sacred, all that is most beautiful and noble in our culture,” he said. 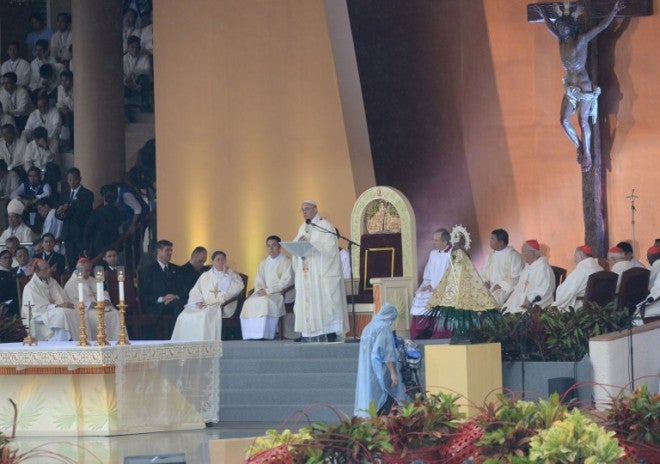 At the end of his visit that saw him meeting with the youth, families, the clergy and Supertyphoon “Yolanda” (international name: Haiyan) survivors, the Pope said he was commending Filipinos to Jesus “who came among us as a child.”

“May He enable all the beloved people of this country to work together, protecting one another, beginning with your families and communities, in building a world of justice, integrity and peace,” he said.

Quoting Paul, the Pope said that God had richly blessed the people whom he had chosen.

“God has blessed us in Christ with every spiritual blessing in the heavens. These words have a special resonance in the Philippines, for it is the foremost Catholic country in Asia; this is itself is a special gift of God, a blessing,” he said.

“But it is also a vocation. Filipinos are called to be outstanding missionaries of the faith in Asia,” he added.

“After all, God chose us for a purpose: to be holy and blameless in his sight,” he said.

“He chose us, each of us to be witnesses of his truth and his justice in this world. He created the world as a beautiful garden and asked us to care for it. But through sin, man has disfigured that natural beauty; through sin, man has also destroyed the unity and beauty of our human family, creating social structures which perpetuate poverty, ignorance and corruption.”

After his homily, he appealed to the crowd: “Please pray for me. And God bless.” A hush fell over the crowd. “Don’t forget to pray for me. God bless you.”

Thousands of the faithful spent the night in and around the park. At the break of dawn, they surged through entry points toward the grandstand, causing a stampede that made useless metal detectors at one entrance to the quadrant. The surge became a torrent by midmorning even as the rain fell and continued through the day.

The Pope, who arrived to roars from the millions that packed Luneta and its peripheries under light rains, began the Mass a little past 3 p.m., several minutes earlier than scheduled.

When the popemobile rolled into view at Quirino Grandstand, the Cebu-based Sandiego Dance Company performed the traditional Sinulog dance to welcome the Pope.

Since the Mass coincided with the Feast of the Holy Child, many turned up holding images of Him.

The choir opened the Mass, with the “Laudate Dominum (Praise the Lord),” singing the verses in Tagalog, kundiman style, and the refrain in the Latin classical mode, giving the faithful preview of the multilingual Mass.

This was followed by the song, “Kyrie, eleison,” sang in Greek, English, Tagalog and Cebuano, after the penitential rite.

The hymns were sung and the text was read in the country’s seven major languages in a spirit of solidarity.

A blind girl, through Braille, read the first reading from Isaiah in Tagalog. The responsorial psalm, as well as the gospel was sung in English. The faithful recited the Apostles’ Creed in the vernacular.

The prayers of the faithful were said in Hiligaynon, Kapampangan, Ilokano, Cebuano, Waray and Bikolano.

The Pope gave communion to bishops as the 1,000-member choir, backed by the 120-man orchestra, sang the stirring “Iesu, Panis Vitae/Tinapay ng Buhay” in several Philippine languages, except for the Latin refrain.

At the conclusion, the faithful lighted candles as they sang along “Tell the World of His Love,” theme song of the Pope John Paul II’s visit in January 1995.

Responding to the Pope’s exhortation, Manila Archbishop Luis Antonio Cardinal Tagle vowed that the Church would “bring light to the peripheries.”

“You arrived in the Philippines three days ago. Tomorrow you will go. Every Filipino wants to go with you,” he said, drawing cheers and hearty applause from the crowd.

“Don’t be afraid, every Filipino wants to go with you, not to Rome, but to the peripheries. We want to go with you to the shanties, to the prison cells, to hospitals, to the world of politics, finance, arts, the sciences, culture, education and social communication,” he added, drawing the Pope’s attention.

“We Filipinos promise, we will pray for you. But we also want to assure you, to remind you, that Jesus, Jesus prays for you. Jesus himself said to Peter, I have prayed for you, Peter, that your own faith will not fail,” he said, and the Pope nodded in agreement.

“Jesus prays for you. How blessed you are,” he added.–With reports from Marlon Ramos, Nikko Dizon, Gil C. Cabacungan, Tarra Quismundo and Julie M. Aurelio