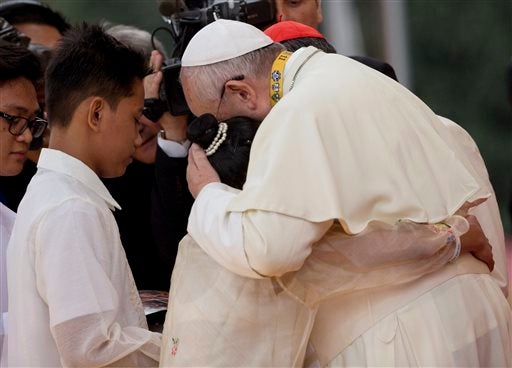 Glyzelle Iris Palomar, 12, spoke to the pontiff and told him of the plight of Filipino children.

She continued: “Marami sa kanila ang naging biktima at masama ang nangyari, tulad ng droga o prostitusyon.” (Many of them have fallen victims to evil things, like drugs and prostitution.”

Looking at the Holy Father, the girl then asked: “Bakit po pumapayag ang Diyos na may ganitong nangyayari?” (Why does God allow such things to happen?)

She stopped, closed her eyes and burst into tears.

“At bakit konti lang ang tumutulong sa amin?” she concluded. (And why are there only a few people who help us?)

The Pope stood up and met the girl halfway on the stage.

Palomar wrapped her arms around the Holy Father and buried her face into his side.

Moved by Palomar’s words and her weeping, the Pope diverged from his prepared speech and responded from his heart: Speaking to his young audience in Spanish with the help of a priest-translator.

“When the heart is unable to answer itself and cry, then we can understand,” he said.

The pontiff then called on the youth to learn how to weep.

Even Jesus, he said, cried for his dead friend and for a family, who lost a child.
“If you don’t learn how to cry, you can’t be good Christians. This is a challenge,”   the Pope said.

Aside from learning how to weep,   the pontiff also called on the youth to learn how to love.

Aside from learning how to weep, the pontiff posed another challenge to the youth – and that is the challenge of love.

“You might ask me, Father, how do we become saints? It is another challenge. It is the challenge of love, which is the most important subject you have to learn in the university,” he said.

Real love, he said, is about “loving and letting yourself be loved.”

“Let yourself be loved,” the Pope added.

The Pope also reminded the youth about the “three languages” — to think well, to feel well, and to do well.

Pope Francis asks for minute of silence for dead volunteer