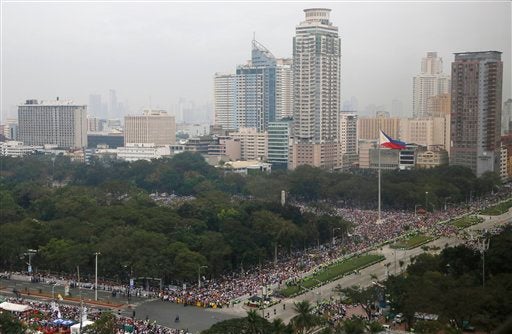 Tens of thousands of the faithful fill the Rizal Park area where Pope Francis is to celebrate Mass to an estimated six million in Manila, Philippines, Sunday, Jan. 18, 2015. AP

MANILA, Philippines– Pope Francis will celebrate mass with millions in the Philippine capital on Sunday in what could be the world’s biggest papal gathering, capping off a dramatic trip in the Catholic Church’s Asian heartland.

A tropical storm that killed one papal volunteer forced the 78-year-old pontiff to cut short his visit to a typhoon-devastated island on Saturday, and rain is predicted for the Manila mass.

But storm-hardened Filipinos are famous for practicing a passionate brand of Catholicism with huge numbers flocking to religious festivals, and millions had already descended on Manila’s streets on Sunday morning.

“We are devotees of the pope,” Bernie Nacario, 53, told AFP as he stood amid a torrent of people with his wife and two young children, hoping to reach the park where the pontiff will give mass.

“The pope is an instrument of the Lord and if you are able to communicate with him, it is just like talking to God himself.”

Nacario said he was a long-time arthritis sufferer, but today his pain had disappeared.

“It is as if the Lord has cured my ailment.”

Catholic Church organizers said they were preparing for a crowd of up to six million, despite forecasts of rain for early evening when the pope is due to give mass at a giant park.

While there were no early official estimates of the crowd, aerial footage displayed on television showed masses of people surrounding the park area and others where the pope would travel earlier in the day.

If the turnout is as big as expected, the crowd would surpass the previous record for a papal gathering of five million during a mass by John Paul II at the same venue in 1995.

The pope’s five-day visit to the Philippines, which began on Thursday, followed two days in Sri Lanka.

It is his second trip to Asia in five months, in a nod to the growing importance of the region to the Catholic Church as it faces declining support in Europe and the United States.

It is also the fourth papal visit to the Philippines, the Catholic Church’s benchmark in Asia, with 80 percent of the former Spanish colony followers of the faith.

Rapturous receptions for the pope throughout his Philippine journey, including millions crowding his motorcade routes in Manila, have cemented the nation’s status as the Church’s Asian role model.

But not everything has gone as planned.

The pope said the main reason for visiting the Philippines was to meet survivors of Super Typhoon Haiyan, the strongest storm ever recorded on land which claimed more than 7,350 lives in November, 2013.

He flew on Saturday morning from Manila to Leyte island, ground zero for the typhoon, for a planned full day in communities where homes were flattened by monster winds and tsunami-like storm surges.

But, with another fierce storm descending on the region, he was forced to abruptly cut short his visit and fly back to Manila.

“I apologize to you all. I’m sad about this, truly saddened,” the pontiff told thousands of people who had gathered at one church shortly before he raced back to airport.

Just 30 minutes after his flight left, a plane carrying top aides of President Benigno Aquino overshot the same runway as it was buffeted by strong side winds while trying to take off. No-one was seriously injured.

Earlier in the day, the storm’s winds tore down scaffolding at the venue where the pope gave mass, killing a woman who was working as a volunteer with the organizing committee.

Still, the crowd of 200,000 typhoon survivors who heard the pope deliver mass in heavy rain were overjoyed the pontiff had braved the dangerous weather to see them.

“Long live the pope,” the crowd chanted as he arrived in Tacloban, the capital of Leyte and one of the worst-hit cities.

The pope delivered a truncated but highly emotional mass in the rain wearing the same type of thin yellow poncho handed out by organizers and worn by most in the crowd.

“I would like to tell you something close to my heart,” the pope said as many in the crowd clutched crucifixes and cried.

“When I saw in Rome that catastrophe, I felt I had to be here. And on those very days, I decided to come here. I’m here to be with you.”

He acknowledged the enduring pain experienced by the survivors.

“Some of you have lost part of your families. All I can do is keep silent. And I walk with you all with my silent heart,” he said. 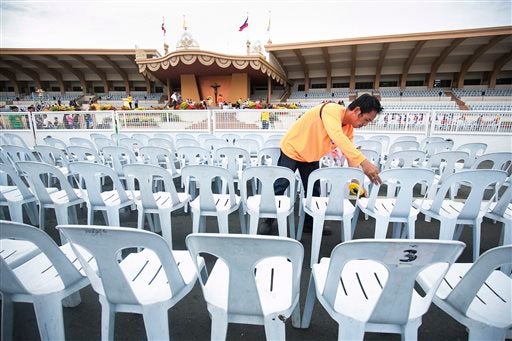 A man arranges a row of chairs as part of the final preparations for Sunday’s eucharistic celebration, which will be officiated by Pope Francis at Quirino Grandstand on Saturday, Jan. 17, 2015 in Manila, Philippines. AP