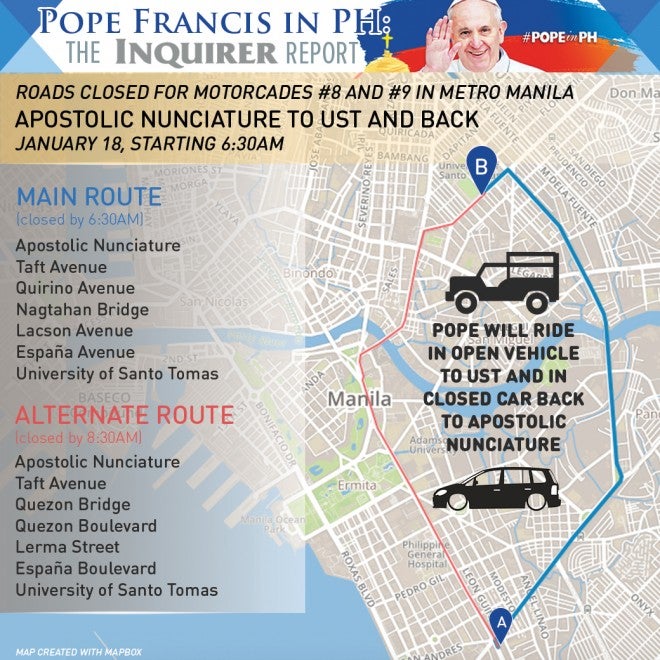 MANILA, Philippines—For the culminating Mass on Sunday of Pope Francis’ four-day apostolic visit to the Philippines, organizers have prepared a total of 2.5 million hosts, the bread that Catholics receive at Communion that they believe is transformed into the Body of Christ.

The Sisters of the Holy Face of Jesus (HFJ), who were given the job of going over the many sacks of host to ensure that there were no fragments and broken pieces before they are consecrated, said they were purchased by the Liturgy Committee of the Archdiocese of Manila from the Carmelite Monastery of the Immaculate Heart of Mary in Pangasinan province.

According to Sr. Ma. Annunciata T. Mendoza, the congregation’s secretary general, the HFJ sisters spent five hours going over the sacks. “We received the sacks of hosts on Jan. 14 and started segregating and sifting the hosts at 2 p.m. of the same day. We ended at 7 p.m.,” she said.

Organizers expect up to 6 million people to attend the Luneta Mass, surpassing the 4 million who came for the Mass celebrated by Pope John Paul II at the same venue at the conclusion of the World Youth Day celebrations in January 1995.

According to Mendoza, 20 tents will be set up throughout the park for the communion rite. In each tent will be stationed one nun from their congregation, three seminarians, and two members of Mother Butler Guild, a group of Catholic women that has clothed hundreds of clergymen on many liturgical occasions, and 250 Eucharistic ministers to assist and give communion to the Mass-goers.

Mendoza said it was the Liturgy Committee that asked her congregation to help with the papal visit and since liturgical ministry was part of the pastoral work of the HFJ, they felt very grateful to be given the opportunity to be of service.

“One of our apostolates is liturgical assistance. Whenever there are big events in the Archdiocese of Manila, either they borrow our liturgical vessels or they ask for the assistance of the sisters. We are assisted by the seminarians too, but they are on the front line while we help behind the scenes,” she said.

The HFJ sisters also assisted with the World Youth Day celebrations in 1995. One of the chalices used by Pope John Paul II during his visit in the country is also preserved in the archives of their convent. “We also had tents during that time but it is more comprehensive this year. The preparations are bigger,” Mendoza said.

Founded in 1986 by Rev. Mother Mary Therese Laxamana Vicente, the HFJ Center and Convent currently has 28 members. It also has mission houses in the provinces of Pampanga, Pangasinan and the Cagayan Valley.

Malacañang on Saturday said Pope Francis already had an idea of how large the crowd will be at Rizal Park today because of information that he got from President Aquino himself.

According to deputy presidential spokesperson Abigail Valte, Mr. Aquino showed the Pontiff pictures of the mammoth gathering at the same venue 19 years ago during the World Youth Day Mass celebrated by Pope John Paul II.

“This was in 1995 and we were only 67 million then. We’re expecting a lot more people to come out and join you for the Luneta Mass,” Valte quoted Mr. Aquino as telling the Pope. Reports from Inquirer Research and Nikko Dizon 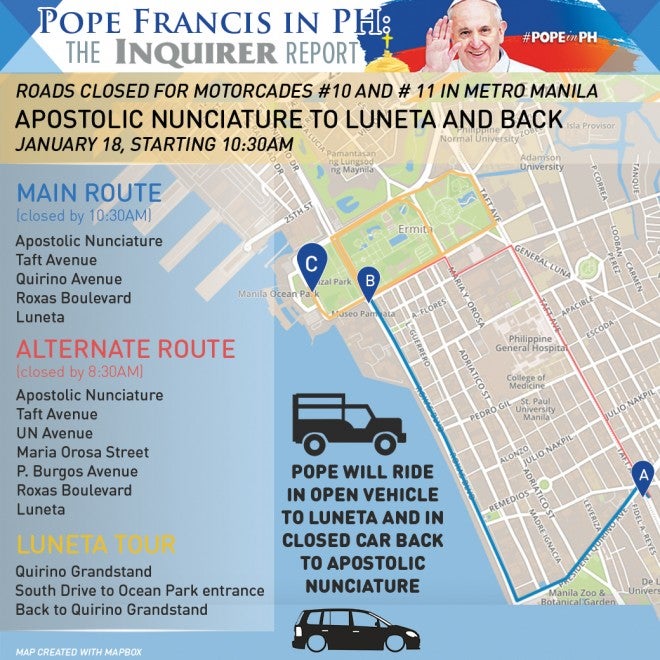