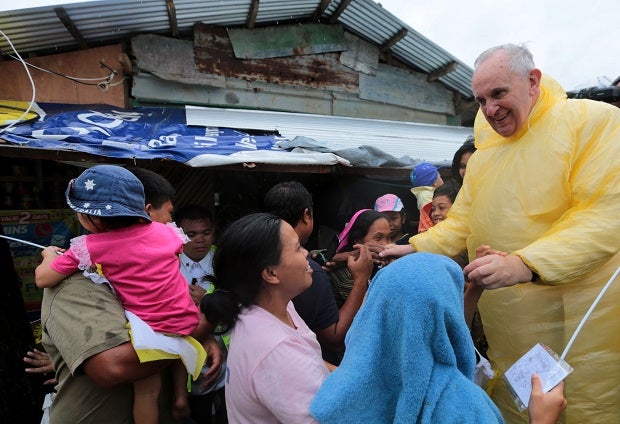 PALO, Philippines–Azucena Escala, 77, was giddy with excitement as she joined about 300 elderly and orphans who were given the opportunity to have a close encounter with Pope Francis on Saturday.

But it didn’t fall through.

Groans could be heard in the quadrangle of the Pope Francis Center for the Poor here after Fr. Manuel Baybay, event organizer, announced that Pope Francis would not be able to meet them personally because he was advised to cut short his trip due to storm Amang.

Baybay, however, explained that before the Pope left, he blessed the facility intended for the orphans and elderly.

To boost their energy that was zapped out by the announcement, Baybay shouted “Viva el Papa.”

Although she was not able to hand in a legal-sized bond paper that contained the names of three sisters, eight children, 18 grandchildren and six great grandchildren, she was happy that the Pope was able to make it to Leyte.

“What is important is his safety. He can always come back to visit us,” said the retired municipal trial court stenographer.

Escala had planned to give the Pope the names of her family so he could pray for them for guidance and wisdom.

Although she had to wake up at 1:30 a.m. and contend with the heavy rain, she didn’t regret coming over to the facility.

“My efforts didn’t go to waste. When you pray, you have to sacrifice. This is part of my sacrifice,” she said. “Pope Francis will always be in my heart.”

The arrival of the Pope was a blessing for Escala who lost her husband when a fire hit their home in Barauen in October 2013. Less than a month later, Supertyphoon “Yolanda” (Haiyan) damaged their house.

Elderly, orphans and persons with disabilities were among the 300 people who were supposed to sit on reserved yellow chairs on newly planted Bermuda grass in front of Mary Undoer of Knots, patron saint of Pope Francis.

The others were representatives of Missionaries of Charities and Kottongnae, a Korea-based Catholic missionary group that runs the facility.

On the left were 50 orphans and elderly who were supposed to greet the Pope during his visit to the center named after him, said Baybay.

The Cor Unum, considered the Caritas of Vatican, provided funds worth P60 million to build the center that would cater to the needs of orphans and elderly.

With a total floor area of 1,414.60 square meters, the facility has an administrative building, clinic, dining hall and separate sleeping quarters for elderly people and orphans.

People inside the center started to get excited at 11:38 a.m. when they were informed that the Pope was already at the Archbishop’s Residence, about 500 meters away, to meet the 30 survivors of Yolanda and the strong earthquake in Bohol.

The luncheon was supposed to take an hour but it only lasted about 30 minutes after the Pope was advised to cut short his trip here because of tropical storm “Amang.”

While they might not be able to break bread with the Supreme Pontiff, meeting him was enough to lift the spirits of the 30 survivors.

“I am so happy. I could not understand what to feel. When I look at him, I don’t see Pope Francis. I see Jesus Christ,” said Veneranda Gentallan, 38, of Maribojoc town.

Gentallan was given a new lease on life after she recovered from multiple bone fracture in her body, a crack on her skull, and a broken jaw that sent her to the hospital in Cebu City for a month.

Gentallan said she went closer to the Pope and touched him. “Nakahikap gyud ko. Ambot ngano ako to gibuhat (I was able to touch him. I don’t know why I did that),” she said, giggling.

At 12:10 p.m., the Popemobile and the Pope’s convoy started descending from the Archbishop’s Residence, which was located on the hilltop, to the Pope Francis Center for the Poor.

At least 30 children on the side of the road started singing and dancing “We are all God’s Children,” “Shepherds Come” and “International Mercy.”

Inside the center, everyone was giddy with excitement.

They started singing locally composed worship songs while waiting for the Pope to walk to the quadrangle where more than 300 elderly and orphans were seated, drenched in rainwater. Some were waving their white small towels.

Baybay said he received a call from a chancellor of the Palo Archdiocese through his mobile phone, informing him that the events had been shortened because the Pope had to depart to Manila earlier than scheduled due to Tropical Storm “Amang.”

He, however, said the Pope stopped by in front of the entrance of the facility where the signage was located.

Although he didn’t come down, he was able to greet Fr. Oh Wong-Jia, founder of Kottongnae, and a nun. He then made a sign of the cross, say a prayer and bless the facility before he left.

Alfonso Protesta, 60, admitted that he was drenched after he had to wait for more than an hour in heavy rain before he could get inside the Pope Francis Center for the Poor.

But it was enough for him to catch a glimpse of the Pope as he was leaving the facility.

“Seeing him was worth getting wet,” he said, smiling.

Protesta said he understood why the Pope had to go and it was important that Pope Francis could fly back to Manila safely.