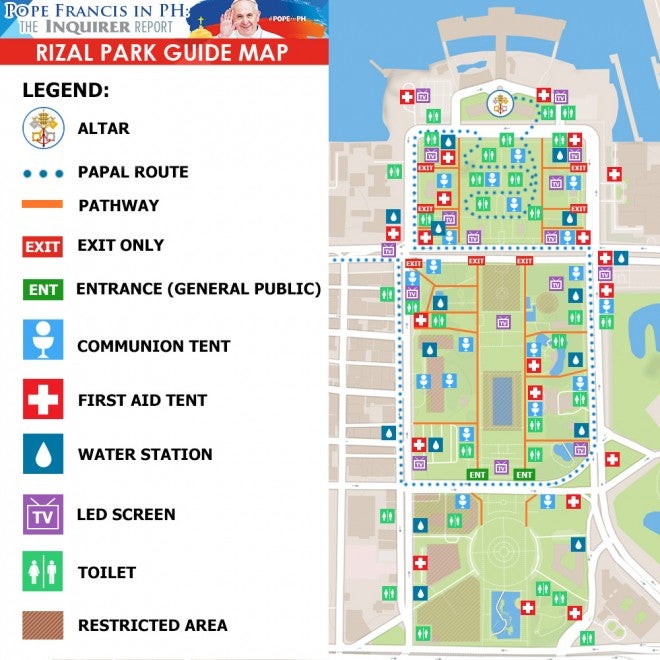 MANILA, Philippines–Pope Francis’ concluding Mass at the Quirino Grandstand in Luneta (Rizal Park) on Sunday will be highlighted by hymns sung in the country’s many dialects and musical forms, in a nod to the inclusive character of the papal visit. The songs will also hew closely to the theme of mercy and compassion, which has been central to the 78-year-old pontiff.

The Mass, expected to draw a record six million Filipinos hoping to get a final glimpse of the Pope before he flies back to the Vatican on Monday, will be livened by songs sung by a 1,000-member choir and composed by Fr. Manoling Francisco, S.J.

The choir will be composed of representatives from parish and school choirs from Quezon City, Pasig, Caloocan, Antipolo, Laguna, Parañaque, Bulacan, Batangas and Tuguegarao, as well as Singapore-based overseas Filipino workers.

The songs would be “the voice of the victims (and) survivors of various calamities crying out to the Lord for intervention and redemption,” Francisco said. “(They’re) almost dirge-like and plaintive,” added the Jesuit who composed the entrance hymn “Laudate Dominum (Praise the Lord)” and communion song “Iesu, Panis Vitae/ Tinapay ng Buhay.”

The communion song, with lyrics written by Fr. Rene Javellana, will highlight seven Philippine dialects in its verses, although the refrain is in Latin, according to the composer.

The song “speaks of Jesus as the bread of life,” Francisco said, adding that song has been written to express “the central tenet of our faith (because) Jesus is the bread who gives life to the hungry and weary, and water to those thirsting for justice.”

Francisco was commissioned by the Catholic Bishops Conference of the Philippines (CBCP) to compose the multi-lingual hymns for the Mass which, under the Vatican-approved setting, will be in Cebuano, Ilocano, Bicol and Hiligaynon, among other dialects.

The text of the Mass will be in Tagalog, Sugbuanon (Cebuano), and Ilocano, with selected verses in Bicol, Capampangan, Hiligaynon (Ilongo) and Waray, as well as in English, Latin and Spanish.

The idea was to “create a greater sense of national consciousness,” said Francisco, who has composed over 100 songs, including “Tanging Yaman,” “Sa ’Yo Lamang,’’ “I Will Sing Forever’’ and “One More Gift.’’

At the same time, “we’d learn to sing and praise in the tongue of other brothers and sisters (and) create a spirit of solidarity,” the composer said.

Francisco had to work under a tight deadline of two months from July 2014 when he was commissioned by the CBCP president, Archbishop Socrates Villegas.

In those two months, he’d scribble notes on music paper “anytime a melody came to mind” between his classes at the Loyola School of Theology and retreat talks, and wherever the inspiration came: on planes, buses, taxicabs and jeepneys, in the chapel of the Jesuit residence at night, and in his office inside the Ateneo de Manila University in Quezon City.

“The task was daunting because of the multi-lingual character (of the songs). I had to ask other Jesuits to help me write the lyrics,” the composer said. “Even as I set music in different languages, I was constantly consulting people,” he said, adding that the work was a “collaborative effort” between him and a pool of arrangers and digital encoders, among others.

“I don’t know how I was inspired,” Francisco said, chuckling. “During the times I was composing (the songs), I was thinking of the deadline… I didn’t sense being inspired, but looking back, I see God’s finger. I’m happy with the turnout.”

“The Mass (songs) were not just my work, but the contribution of so many Filipinos,” he said, citing “Glory to God,” which has three verses. The first section on God the Father has been written in Ilocano, and has incorporated the Kalinga indigenous rhythm; the second on God the Son was written in Tagalog, and patterned after the kundiman, while the third verse on the Holy Spirit was in Cebuano, and employed the rhythm of the singkil dance, Francisco said.

The simple four-line refrain is in English, Latin, Cebuano and Tagalog, according to Francisco.

The more complex verses would be sung by the choir, but the congregation would be invited so sing the simple chorus, Francisco said, adding that bringing in several languages in the songs would be a way of “making God’s compassion and mercy more inclusive.’

Francisco composed other songs in the Mass, including “Kyrie/Lord, Have Mercy” which will be sung in Greek, English, Tagalog and Cebuano; “Alleluia,” “Credo/Creed,” “Prayers of the Faithful,” “Alay sa Diyos,” and “Sanctus/Holy” in Tagalog, Cebuano, Bicolano and other Philippine dialects, and “Agnus Dei/Kordero ng Diyos” in Tagalog, Cebuano and Latin.

The choir will also sing “Ama Namin,” which Francisco composed a few years ago, as well as three compositions by Ferdie Bautista: the “Responsorial Psalm,” and the communion songs “Prayer for Generosity” and “Hidden God.”

For post-Communion, the choir has lined up other songs, like Jamie Rivera’s “We Are All God’s Children,” the theme song of the papal visit, Trina Belamide’s “Tell the World of His Love,” the theme song during Pope John Paul II’s 1995 visit, and Fr. Eduardo Hontiveros’ “Pananagutan.”

“(The Mass songs are) a mixture of the old and the new, of traditional sacred music and contemporary sounds, (and) indigenous rhythms with Western melodic patterns. All (are) showcasing the rich culture that represents our country for the purpose of fostering solidarity,” Francisco said.