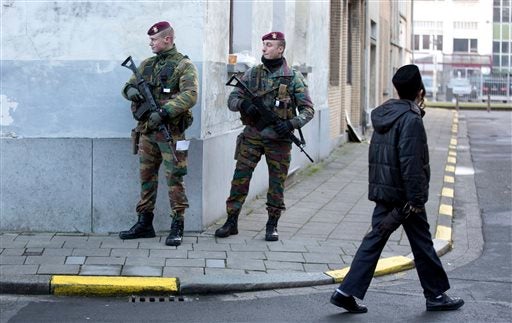 Belgian para-commandos patrol near a synagogue in the center of Antwerp, Belgium, on Saturday, Jan. 17, 2015. AP

BRUSSELS, Belgium—Armed soldiers fanned out to guard possible terror targets across Belgium as authorities rushed to thwart more attacks by people with links to Mideast Islamic extremists, a day after anti-terror raids netted dozens of suspects across Western Europe.

It was the first time in 30 years that troops were used to reinforce police in Belgium’s cities.

In an interview broadcast Saturday on Belgium’s VRT network, Defense Minister Steven Vandeput said soldiers could be deployed to protect certain embassies and some buildings within Antwerp’s Jewish quarter. Belgium has increased its terror warning to 3, the second-highest, following the anti-terror raids of Thursday which left two suspects dead.