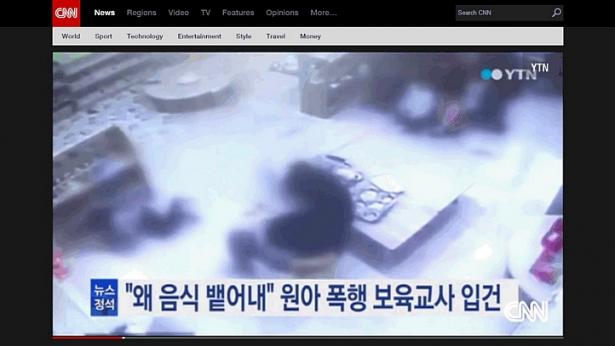 A toddler (left) lies on the floor after being hit by her teacher in a South Korean nursery. SCREEN GRAB FROM CNN

SEOUL—A video of a childcare teacher slapping a toddler hard she falls to the ground has caused outrage in South Korea.

In a CCTV footage from the center, a little girl is forced to eat kimchi. When she spits it out, the teacher swings at her hard, and the girl falls, unable to get up for a few seconds.

The teacher from a center one hour west of Seoul was detained on Thursday, CNN reported.

The 33-year-old, known only as Yang, admitted on Monday she had punched the child, but claimed the act was part of disciplinary measures to correct the child’s bad habit, investigators said.

The police secured surveillance camera footage at the day care facility from the last 24 days— the maximum storage period—to look into any further charges against Yang.

The investigators also collected witness accounts from parents of 16 other children who reportedly shared similar experiences, The Korea Herald said. It appears this was not an isolated incident.

Yang had reportedly been fired from another day care facility for locking a child in a room, according to the parents’ accounts.

The center is now closed, and the head teacher has apologized to the children and the parents.

South Koreans, horrified at the case, have been publishing the personal details of the teacher and head teacher online.

In protest, parents in the area are taking turns to stand vigil outside the childcare center, holding a sign that says “No to violence against children.”

A similar case in the area was caught on camera in December, and parents are asking if more cases are going unreported.