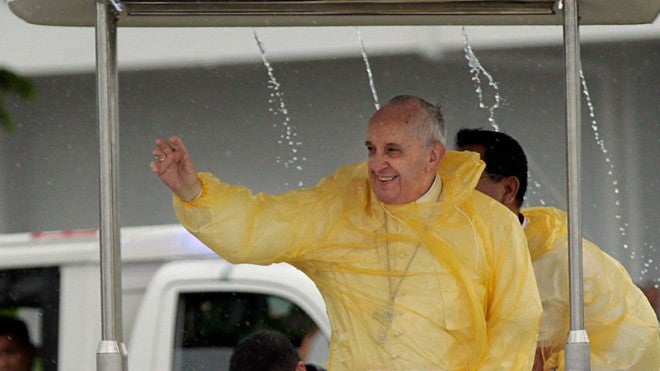 He quickly blessed the Pope Francis Center for the Poor then passed by Palo Cathedral for a few minutes before proceeding to the Daniel Romualdez Airport.

He apologized to the people of Leyte for cutting short his trip due to bad weather. The province has been placed under signal number 2 due to Tropical Storm ‘Amang’.

Reports said the pilots of the Philippine Airlines plane which he used for the Leyte trip had informed the Pope’s security that they had to leave by 1 p.m. or else they would have more difficulty taking off due to strong winds and rains.

Interior Secretary Mar Roxas in Manila said it was the Vatican which ultimately decided to shorten Pope’s stay in Leyte.

“(The) government adjusted,” Roxas said, adding that the government is ready for the changes in the Pope’s schedule.

Defense Secretary Voltaire Gazmin said no changes have been made yet on the Pope’s scheduled activities on Sunday, Jan. 18.

The pope was originally scheduled to leave Leyte for Manila at 5 p.m. He arrived in Leyte at 8:47 a.m. Saturday and celebrated Mass at the airport attended by thousands of rain-drenched devotees and pilgrims. After the Mass, the pope surprised the crowd with a motorcade around the Mass venue.