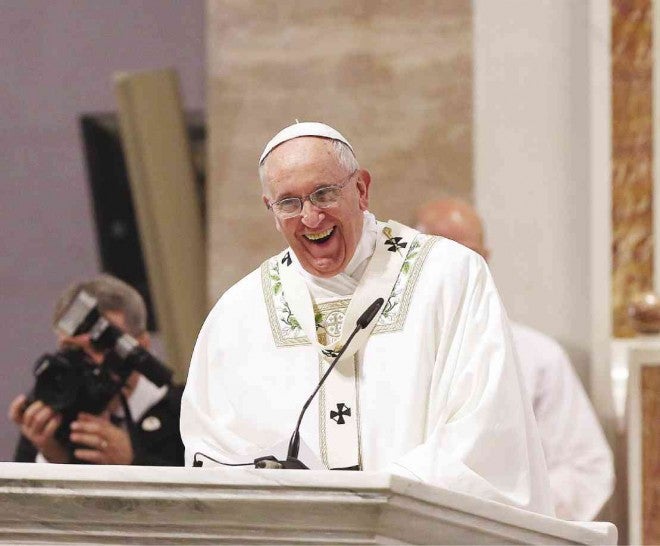 ‘DO YOU LOVE ME?’ Pope Francis lets out a hearty laugh during his homily at the first Mass he celebrated here at Manila Cathedral on Friday where the question from the Bible quoting Jesus who asked Peter if he loved Him, is met with a resounding “yes” by his enchanted audience . MARIANNE BERMUDEZ

Pope Francis on Friday night urged Filipino families to serve as “sanctuaries of respect for life” by proclaiming the sacredness of life from birth to death.

“What a gift this would be to society if every Christian family lived fully its noble vocation,” Francis said, addressing a rally of Filipino families at Mall of Asia Arena in Pasay City.

In what could be the best received address so far of his five-day apostolic visit to the Philippines, Francis exhorted the families to “[r]est in the Lord like Joseph, and rise with Jesus and Mary” and urged them to protect the family from the “ideological colonization” of migration, materialism and redefinition, and raise holy families.

Showing that the family is close to his heart, Francis deviated from his prepared text and spoke about a couple dreaming of their child during the nine months of pregnancy.

“Is it true or not?” he asked the crowd. “It is not possible to have a family without such a dream.”

“If you lose this capacity to dream, then you lose the capacity to love…,” he said, drawing cheers from the crowd. “I recommend that you examine your consciences: Today, did I dream about my sons and daughters?”

“Did I dream about the love of my husband and wife?” he added. “Don’t lose this ability to dream.”

Addressing himself to the thousands of families in the arena and across the country, Francis issued a pastoral message, nudging Filipinos not to lose their capability to dream of others.

Despite the serious tone, he showed yet again his tenderness and candor when he kissed, hugged and blessed babies, the sick and the elderly on the road, and inside the arena.

“Pray often and take the fruits of your prayer into the world, that all may know Jesus Christ and his merciful love. Please pray also for me, for I truly need your prayers and will depend on them always,” he said.

The Pope celebrated a liturgy program for the thousands of families that gathered in and out of the arena, where he delivered an allocution after a reading from the Gospel from Matthew.

Drawing from Matthew’s Gospel on an angel’s warning in a dream to St. Joseph on the dangers facing the Holy Family, the Pope divided his talk into three segments: “Resting in the Lord, rising with Jesus and Mary, and being a prophetic voice.”

“The Scriptures seldom speak of St. Joseph, but when they do we often find him resting, as an angel reveals God’s will to him in his dreams,” he began, noting that in the reading, Joseph was resting not once but twice.

“This evening I would like to rest in the Lord with all of you, and to reflect with you on the gift of family,” he added before a packed audience.

Then he proceeded to speak on the three subtopics, reading from a text in English, but often digressing in Spanish to speak about his personal thoughts and feelings.

The Pope said that rest was essential for spiritual health “so that we can hear God’s voice and understand what he asks of us.”

“Joseph was chosen by God to be the foster father of Jesus, and the husband of Mary. As Christians, you too are called, like Joseph, to make a home for Jesus. You make a home for him in your hearts, your families, your parishes and your communities,” he said.

“To hear and accept God’s call, to make a home for Jesus, you must be able to rest in the Lord,” he added.

To accomplish this, everyone must make time for prayer every day, otherwise “we will not know the most important thing of all: God’s will for us.”

“And for all our activity, our busy-ness, without prayer, we will accomplish little,” he said, urging Filipinos to pray as a family, and learn “to move beyond our needs, to encounter others and share our lives with them.”

Speaking on the topic of Rising with Jesus and Mary, the Pontiff urged families to “rise from our slumber,” saying that each one has a “special role in preparing for the coming of God’s kingdom” in the world.

He cautioned Filipinos against the “ideological colonization” of poverty-driven migration of Filipinos abroad in search of jobs, materialism and attempts to redefine family.

A tenth of the Philippines’ population of 100 million work in other countries because of the lack of jobs at home, creating an imbalance in which only one parent raises the children, who care little about the absence of the other parent because they get all of their material needs, bought with the absent parent’s foreign earnings.

“The angel of the Lord revealed to Joseph the dangers that threatened Jesus and Mary, forcing them to flee to Egypt and then to settle in Nazareth,” he said.

“So too, in our time, God calls upon us to recognize the dangers threatening our own families, and to protect them from harm,” he said.

Speaking of the Philippines, the Pope cited the countless families reeling from the aftermath of disasters, as well as families separated by migration and search for employment.

“While all too many people live in dire poverty, others are caught up in materialism and lifestyles, which are destructive of family life, and the most basic demands of Christian morality,” he said.

Also, the family is threatened by “growing efforts on the part of some to redefine the very institution of marriage, by relativism, by the culture of the ephemeral, by a lack of openness to life,” the Pope said.

He then exhorted Filipinos to build good, strong, holy and loving families.

“Our world needs good and strong families to overcome these threats,” he said.

“Every threat to the family is a threat to society itself. The future of the humanity as St. John Paul often said, passes through the family,” he said.

“So protect your families. See in them your country’s greatest treasure, and nourish them always by prayer and the grace of the sacraments. Families will always have their trials, but may you never add to them,” he said.

“Don’t ever lose the illusion of your boyfriend and girlfriend,” he continued, drawing wild cheers, and faint chants of “Viva, Papa.”

In his message, the Pope also reminded Filipinos about their Christian duty to serve as prophetic voices in communities.

“When families bring children into the world, train them in faith and sound values, and teach them to contribute to society, they become a blessing in our world,” he said.

At the same time, in the Year of the Poor, he also reminded Filipinos about their call as “missionary disciples of Jesus.”

“This means being ready to go beyond your homes, and to care for our brothers who are most in need,” he said, calling on Filipinos to show concern especially for the elderly and children without parents.

The Pope motored to the arena in his open-side popemobile, and as soon as it rolled into view on the wide screen, the families roared into cheers. He arrived at around 5:30 p.m., and was welcomed by Antipolo Bishop Gabriel V. Reyes.

Reyes chairs the Catholic Bishops’ Conference of the Philippines’ Episcopal Commission on Family and Life.

Lawyer Francisco “King” Rodrigo, his wife Boots Anson-Rodrigo and their family welcomed the Pope with a message, and a garland of sampaguitas.

The ceremony began with a gathering song, greeting and opening prayer. This was followed by the testimonies from the three families. And it ended with the Lord’s Prayer, with the families singing along.

Before he arrived in the arena, he stopped to kiss a girl in a red bonnet, drawing cheers from the crowd.

Once inside, amid chants and roars, he walked into the front-row seats to kiss, hug and bless babies, toddlers, the sick, the disabled and elderly.

Touched by the Pope

In one such moment of tenderness, he touched the face of a boy crying on the lap of his father, as if to hush him.

“He was smiling. That’s the image I have of him,” said wheelchair-bound Peter John Barcelon, 24, of Calapan, Mindoro, who was touched on the forehead by the Pope.

“He’s a very simple and humble guy. He’s Jesus Christ personified,” said cardiologist Victoria Edna Monzon, who was also in a wheelchair, and also blessed by the Pope.

“I felt so blessed. I had an on-and-off pain, and today is the most painful,” Susan Chong, who was also blessed by the Pope, said of a pinched nerve. “It was really the Lord’s blessing.”

The Pope’s exhortation to protect the families resonated with Marites Burce, 35, who showed up with her husband, Enrico, a person with disability like her, and their two daughters.

“We should pray together so the family will be strong. He also said that the family can be a blessing of the world,” she said.

VIPs also attended the Pope’s meeting with the families for different reasons.

Former Sen. Joey Lina and his wife, Lory, both members of the Elim Catholic community, turned up with their five children at the arena to “pray” together with the Pope.

“This is an opportunity to pray together for believers, for people who are active in the church. You don’t know how the Holy Spirit will work. But I think it’s important to be here,” Lory said hours before the Pope motored to the arena.

Their children, who are members of their community’s youth ministry, accompanied them, but stayed behind outside the arena.

Direction of the Church

While invited as chair of the Philippine National Red Cross, former Sen. Richard Gordon saw the event as an opportunity to see the Pope up close.

“I met John Paul II twice. I also saw Pope Benedict. I’m very fortunate to have seen two or three great Popes in my lifetime. The Pope is the Vicar of Christ here on earth, and obviously the way he speaks, he shows the direction of the Church,” Gordon said.

“I like the way this Jesuit Pope is taking the Church into a more meaningful Church. In the same way, the government should be more meaningful, and go beyond forms, go beyond substance, go beyond recriminations, and focus on building the nation,” he added.

The liturgy program was preceded by the praying of the rosary, a family’s consecration to Jesus, Mary and Joseph, and hours of entertainment, including songs, dances, a play and games.

Pope Francis breaks protocol on his way out of Manila Cathedral