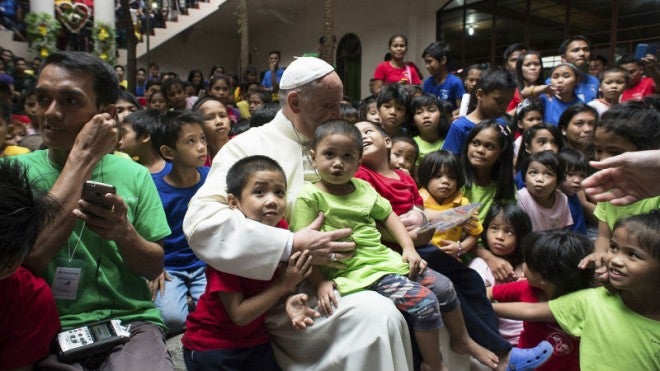 Pope Francis sits with children of the Anak-Tnk Foundation, founded in 1998 by a Jesuit priest, which helps homeless children and those living in the slums, in Manila’s Intramuros district after celebrating Mass at the nearby Manila Cathedral, in Manila, Philippines, Friday, Jan. 16, 2015. Some 300 children at a Manila center for street kids got the surprise of their lives on Friday when Pope Francis showed up at their door. (AP Photo/Osservatore Romano, Pool)

MANILA, Philippines–Pope Francis said on Friday that he was “very moved” during his visit to a foundation taking care of street children, a surprising move made by the pontiff after his mass at the Manila Cathedral.

During his message to Filipino families gathered at the Mall of Asia (MOA) Arena, Pope Francis said that the ANAK-TnK foundation for street children which he visited captures the Christian meaning of family.

“I was very moved after the mass today, when I visited that shelter and home for children with no parents. How many people in the church worked so that house becomes a home. This is what it means to forward prophetically the meaning of the family,” the pope said in Spanish and was translated by an interpreter.

During his allocution in the “Meeting of Families”, the supreme pontiff emphasized the need for families to help the less fortunate.

“I would ask you, as families, to be especially mindful of our call to be missionary disciples of Jesus. This means being ready to go beyond your homes and to care for our brothers and sisters who are most in need,” he said.

Pope Francis also reiterated that it is the responsibility of the faithful to not let the poor feel they have been abandoned.

“I ask you especially to show concern for those who do not have a family of their own, in particular those who are elderly and children without parents. Never let them feel isolated, alone and abandoned, but help them to know that God has not forgotten them,” the pope added.

Known as the “Pope of Surprises,” Pope Francis stayed true to the said monicker by violating protocol after celebrating mass tor the clergy and the religious at the Manila Cathedral Friday morning. Instead of walking to the church’s front entrance as planned, he exited through a side door and went to visit ANAK-TnK foundation.