Tagle: Filipinos afflicted every possible way but are not crushed 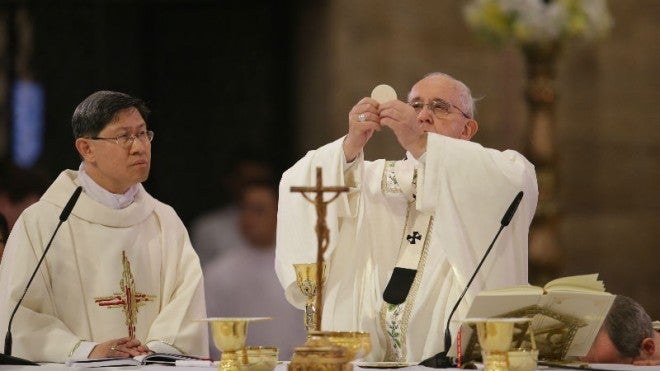 Pope Francis, right, lifts the host beside Cardinal Luis Antonio Tagle, archbishop of Manila, as he officiates a mass with clergy and religious at the Cathedral Basilica of the Immaculate Conception in Manila, Philippines, Friday, Jan. 16, 2015. (AP Photo/Aaron Favila)

MANILA, Philippines –“We are afflicted every possible way, but we are not crushed.” This was how Manila Archbishop Antonio Luis Cardinal Tagle described Filipinos to Pope Francis during the Mass at the Manila Cathedral in Intramuros, Manila on Monday.

Tagle likened Filipinos to the cathedral, which he said had been destroyed by fires and either “partially or totally” damaged by earthquakes in the past but stood the test of time.

“This cathedral has been razed to the ground many times but it refuses to disappear. It boldly rises from the ruins just like the Filipino people,” he said.

“Yes, Holy Father, we bishops, priests and religious men and women have seen and have lived the suffering but also the determination of our people. We are afflicted in every way possible but we are not crushed,” he added.

And what are the secrets of the resilience of the Filipino people?

The answer, Tagle said, was provided by writer-priest Horacio dela Costa, who identified the two “treasures” and “wealth” of Filipinos as music and faith.

“Our melodies make our spirits soar above the tragedies of life. Our faith makes us stand up again and again after deadly fires, earthquakes, typhoons and wars,” the cardinal said.

“And now as many of our poor people are just beginning to rise from natural and human-made calamities, as we’re struggling, you Holy Father came to us.”

“You bring fire not to destroy, but to just purify. You bring an earthquake not to shatter but to awaken. You bring weapons to assure, to encourage. Indeed, you are Peter, the rock upon which Jesus built his Church. You are Peter who comes to strengthen your brothers and sisters in faith…” Tagle added. 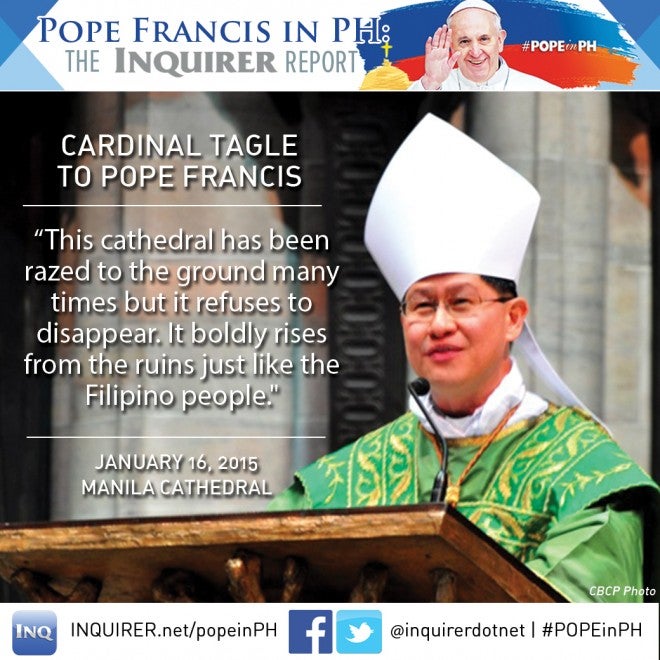 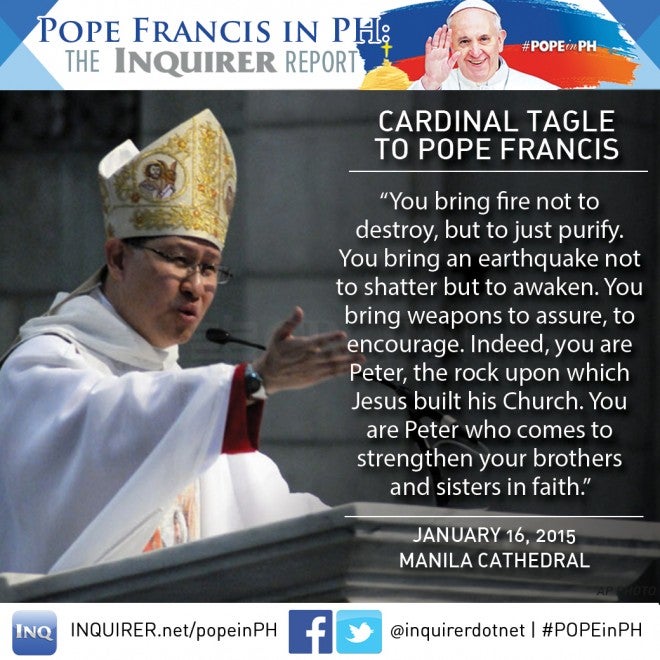