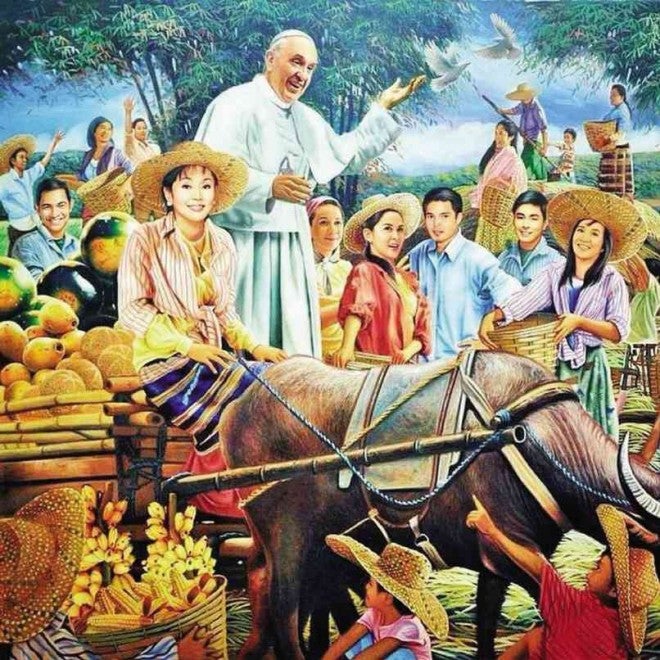 A PHOTO taken from the Facebook page of actor Marian Rivera shows a painting by popular artist Dante Hipolito titled “Salubong,” depicting Pope Francis in a rural setting and being welcomed by some show biz celebrities. PHOTO FROM MARIAN RIVERA’S FACEBOOK fan PAGE

The painting shows a likeness of Pope Francis being welcomed in a rural setting, most probably in the Philippines. But why the party of greeters resembling entertainment personalities and politicians?

“Salubong,” as the title of a 29×24 oil on canvas painting by popular artist Dante Hipolito goes, has gone viral in social media networking sites and has been reviled by a group of progressive painters and artists as a betrayal of the Pope’s message of “mercy and compassion” behind his visit to the country on Jan. 15-19.

“The painting contradicts the concept of realism as it shows nothing about the submerged reality of the nation’s agricultural workers,” Michael Beltran, chair of Kabataang Artista para sa Tunay na Kalayaan (Karatula), said in a statement.

It is “unreflective of the turmoil that many Filipinos experience in their social and economic lives,” Beltran said.

A photo of the painting, which was being spread on Facebook, was sourced from the official Facebook fan page of Marian Rivera. As of Monday afternoon, it had been shared 2,900 times.

“Seriously, Pope Francis would not surround himself with movie stars and politicians. And the fact that these ‘people’ (aka elite) are depicted as common laborers/farmers is laughable,” commented Facebook user Marie Ordinario Aucena.

But another user, Journey’s Orong, retorted: “May kanya kanya tayong paniniwala na hindi kailangang ipilit sa iba. Respect ang tawag dun. (We each have our own beliefs. Respect is what we call it) And this is a work of arts (sic), just appreciate.”

Beltran particularly took a pointed dig at the inclusion of Kris Aquino’s image. “Mockery strikes deeper with Kris Aquino, who benefits from the oppressed farmers at Hacienda Luisita.”

Karatula said the painting misrepresented the message and image of the country’s agricultural situation to the Pope.

“As artists, we have an unusual and remarkable opportunity to enjoin him in confronting the hardships we face hand in hand with the people and not its personalities,” Beltran said.

“Undoubtedly the Aquino administration would welcome such a painting as ‘Salubong’ as it omits the unpopular and unjust policies of his term,” he added.

He said it would be prudent to show the positive side of being a Filipino without neglecting the struggles that confront the people.

Karatula members, along with other artists based in Metro Manila, are planning to unveil a giant 50-foot-long mural to welcome the Pope and invite him to stand with the people against all forms of injustice.

“We hope the Pope’s visit will be a fruitful one. He was shown to be the most politically and culturally astute representative of the Church in recent years. We welcome him for his biases toward the poor and oppressed, and invite him to confront injustices alongside Filipinos,” Beltran said.