Priests with kids up scandal level

After saying Mass, having their kids baptized, they urge end to celibacy
By: Nestor P. Burgos Jr. - Reporter / @nestorburgosINQ
Inquirer Visayas / 01:45 AM January 14, 2015 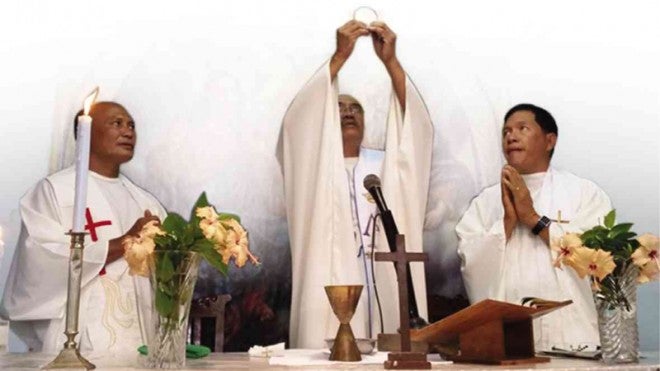 IN AN ACT rich in symbolism, priests with children—Jose Elmer Cajilig, Jesus Siva and Hector Canto—celebrate Mass despite two of them having lost their license to do so from the Church after violating their vows of celibacy. NESTOR P. BURGOS/INQUIRER VISAYAS

LAMBUNAO, Iloilo – One of the most contentious issues confronting the Catholic Church, priest celibacy, has taken a small, but scandalous, representation here with the baptism of the children of two priests by another priest who has children of his own.

The priests, through the baptismal rites, are renewing their call for optional celibacy.

“We appeal for compassion and mercy from Pope Francis for the priests and their children. Baptizing these children is giving them dignity,” said Fr. Jesus Siva, 54, who officiated the rites.

The priest-fathers—Hector Canto, 53, and Jose Elmer Cajilig, 52—whose children were baptized said children of priests were suffering from stigma because of the celibacy rule.

Both wore liturgical vestments and concelebrated the Mass with Siva.

At least 80 friends, relatives and parishioners of the three priests attended the rites at Our Lady of Perpetual Help Chapel in Lambunao, 48 kilometers north of Iloilo City.

Canto has three other children, ages 7 to 14, and one of them served as an altar boy during the baptismal rites.

Canto said the event was originally scheduled for December last year, but it was moved to Jan. 11, in time for the papal visit. “We are hoping that changes will happen in the Church. I don’t want to leave priesthood,” Canto told the Inquirer.

He said he saw the Pope as open-minded, though he had no illusions that changes in the celibacy rule would happen soon. “It may not be during my lifetime,” he said.

Siva, Canto and Cajilig have been calling on the Church to allow priests to marry, believing that “celibacy is a gift” and should not be mandatory for all priests.

Despite objections from Church officials, Siva officiated the marriage of Canto and Cynthia Diamante on May 31, 1998, at the Mt. Zion chapel in Barangay (village) Balagiao in Lambunao.

In June 1999, Church officials revoked the two priests’ license to solemnize marriages. Since then, they have not received assignments but continue to say Mass every Sunday in Balagiao and in the town proper.

While acknowledging that mandatory celibacy has advantages, Siva said it had no basis in the Bible and caused “a deluge of problems.”

“What is happening to most children of priests whose fathers have not acknowledged their responsibility? They (children) and their mothers are told to hide the truth or transfer residence,” Siva said.

He said many priests, who have children and partners, “are still hiding” and appealed to the faithful to be compassionate to children of priests.

“We have not left our priesthood. We have not changed our religion,” he said.

Cajilig’s 27-year-old partner, Kristine Joy Catalbas, said she was thankful that her partner had openly acknowledged his relationship with her. “I cannot imagine the difficulty of partners of priests who have not been acknowledged,” she told the Inquirer.

Catalbas has her share of “painful” condemnation and criticisms over her relationship with a priest. But she said she had already accepted the criticisms and tried to make her critics understand.

Irene Castor, 64, one of those who regularly attend Masses officiated by the married priests, said she was not bothered by the idea of priests having children.

“We pray to the Lord. What is important is that we have a priest who serves us,” she said.

Evelyn Lubay, who attended the baptismal rites, said it was better for priests to openly admit having partners and children.

Canto said he and the other priests had not thought of seeking an audience with the Pope during his visit. “We are nobody. But we hope he hears us,” he said.