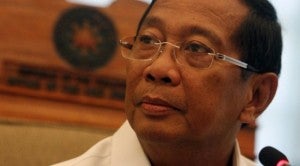 Binay still prevails as the top pick to succeed President Benigno Aquino III in the 2016 elections, according to results of the SWS survey.

Drilon’s latest satisfaction rating was down eight points from his previous rating, posting a “moderate” +28 from “good” +36. Belmonte’s score still borders in the “moderate” level: from third quarter’s +13 to +11.

The chief justice incurred a +1 increment in her score: from third quarter’s +10 to +11.

As for key government institutions, the Senate and the Supreme Court incurred the same satisfaction rating of “moderate” +26 from “moderate” +28 and “good” +32 ratings respectively.

The House of Representatives incurred a slip of +1 from “moderate” +21 to +20 in the latest survey.

The Cabinet recorded the lowest score of a “neutral” +9 from “moderate” +18.

The survey has sampling error margins of ±2 percent for national percentages; ±6 percent each for Metro Manila, “Balance Luzon” and Mindanao; and ±3 percent for the Visayas.

The survey was conducted with face-to-face interviews.