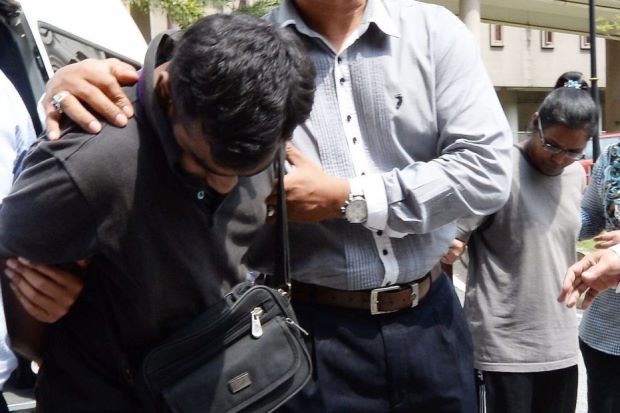 Basheer Ahmad (left) and his wife Nur Shila at the KL Sessions Court last year. Photo from THE STAR ONLINE

KUALA LUMPUR — A warrant of arrest has been issued for the couple facing multiple charges over the theft of money from the bank accounts of three passengers and a flight steward from the missing Malaysia Airlines (MAS) flight MH370 after they failed to turn up in court for their trial Monday.

Sessions Court judge Norsharidah Awang granted an application by DPP Ahmad Fadhli Mahmud for an arrest warrant against the couple over their non-attendance in court to answer to their charges.

Bank officer Nur Shila Kanan and her mechanic husband Basheer Ahmad Maula Sahul Hameed, both 34, were accused of making illegal transfers and withdrawals from those’ bank accounts amounting to RM110,643.

They had on August 20 last year claimed trial to the charges.

DPP Ahmad Fadhli applied for the arrest warrant saying that the couple had failed to turn up in court while their two bailors also did not appear in court to explain their non-attendance.

Upon hearing this, the judge also issued a show cause notice against the bailors.

The court has set February 4 for mention.

Nur Shila faced 12 principal charges in relation to transferring funds from accounts in question to another bank account, theft, cheating to get the approval of a debit card and a new Internet banking application, as well as using forged documents at the HSBC branch in Jalan Lebuh Ampang from May 14 to July 14, last year.

Basheer faced four main charges for allegedly using a debit card and an ATM card to withdraw cash from the bank accounts.

He was said to have committed the offences at the bank’s ATM at Ampang Point in Ampang between May 15 and June 29, last year.

Each of them also faced four alternative charges for stealing cash from the concerned HSBC bank accounts.

HSBC was reported as saying that it notified police of potential fraud involving those accounts leading to the arrest of the couple.

The judge had released the couple in a RM12,000 bail in one surety for each accused and impounded their passports last year.