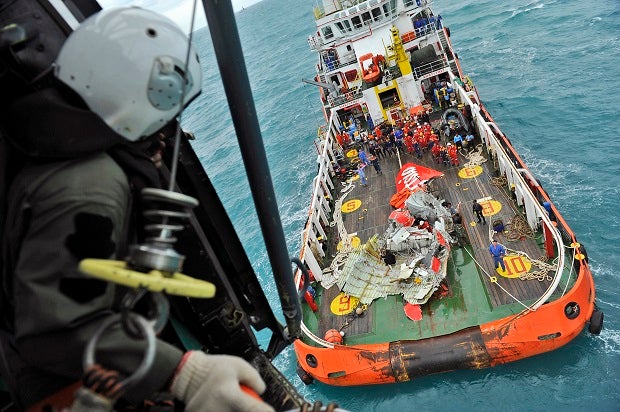 In this photo taken from an Indonesian Air Force Super Puma helicopter Saturday, Jan. 10, 2015, portion of the tail of AirAsia Flight 8501 is seen on the deck of a rescue ship after it was recovered from the sea floor on the Java Sea. Investigators searching for the crashed AirAsia plane’s black boxes lifted the tail portion of the jet out of the Java Sea on Saturday, two weeks after it went down, killing all 162 people on board. AP

PANGKALAN BUN, Indonesia — Divers have found the second black box from the AirAsia plane that crashed more than two weeks ago, but they have not yet been able to free it from debris on the floor of the Java Sea.

Suryadi Bambang Supriyadi, the operation coordinator at the National Search and Rescue Agency, says the cockpit voice recorder was located Monday just hours after officials announced the data flight recorder had been brought to the surface.

He says it is stuck under heavy wreckage, and divers are working to lift it.

Searchers began zeroing in on the sites a day earlier after three Indonesian ships picked up intense pings from the area.

The two instruments are vital to understanding what brought Flight 8501 down on Dec. 28, killing all 162 people on board.