‘Pope to bring unity with Muslims’

MANILA, Philippines—The visit of Pope Francis to the Philippines next week brings a promise of unity to a country divided by faith, a Muslim leader said on Saturday.

Moxsir, one of the 10 religious leaders who will meet with the Pope, said the importance of peace would be tackled in the interfaith dialogue. 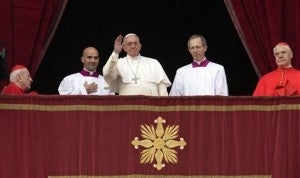 Pope Francis delivers his “Urbi et Orbi” (to the city and to the world) blessing from the central balcony of St. Peter’s Basilica at the Vatican, Thursday, Dec. 25, 2014. AP

“The Filipino Muslim community is supporting his advocacy, particularly his desire for Catholics and Muslims to have symbiotic relations,” Moxsir told the Inquirer on the sidelines of an interreligious dialogue in Camp Crame, Quezon City.

Pope Francis has shown his commitment to improving Christian—Muslim relations by praying in a mosque in Istanbul, Turkey, and for saying that equating Islam with violence was wrong.

Muslims have been labeled as terrorists and a social plague because of careless generalizations and a lack a of understanding of Islam, said Moxsir, who is also the chief of the Spiritual Ministry Division of the Philippine National Police (PNP) Chaplain Service.

“Not all Muslims are terrorists,” he said.

Misconceptions involving Muslims are caused by “illiteracy or ignorance of the religion,” he added.

Instead of talking about doctrines, Moxsir said finding the “commonality and similarity” among different religions would lead to understanding and respect.

Everyone, no matter what religion, needs love, peace and hope, he said.

“We are all created by God. We all belong to a family or to a tribe,” he added.

ICP and the Heavenly Culture, World Peace, Restoration of Light (HWPL) gathered Muslims, Hindus and Evangelicals for the Alliance of Religions Dialogue yesterday for discussions of the “truth” about their religions.

HPWL, founded by Korean religious leader and world peace advocate Lee Man-hee, is a private organization that engages political and religious leaders and the youth in talks and activities that will allow them to look beyond differences in culture, belief and region.

Agnes Reyes, HPWL director in the Philippines, said, “Religion divides us. The organization is finding ways for representatives from different religions to come together and unite for world peace.”

“We have to hear and learn from the different religious leaders and seek the truth,” she said.

Reyes said religious leaders needed to be open-minded to find the “truths” that united religions.

Police Senior Supt. Alberto Lucea of the PNP Directorate for Integrated Police Operations in the Visayas said, “We are fortunate to have Pope Francis who is reforming the church.”

Lucea, who represented the Catholic faith, said “unity is essential in every religion.”