MANILA, Philippines – Faith remains unwavering for some devotees whose plights and troubles failed to stop them from braving the dense crowd in this year’s Feast of the Black Nazarene, one of the world’s largest and riskiest religious gatherings.

Even when they were beset with problems despite years of attending the feast, they did not allow a shred of doubt to stop them from fulfilling their annual vows. 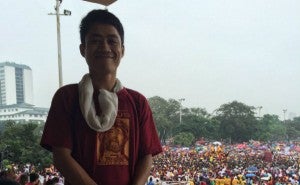 PJ Bernardo, an assistant chef at Café Ysabel, lamented that his two-year-old baby still got sepsis, a blood infection, even when he has been attending the procession for five years.

In all those years, he even managed to get through the frenzied crowd and touch the statue.

He said, though, that he did not get angry with God. “Nagtampo lang. Sa limang taong namamanata ako, nagkasakit pa anak ko (I felt bad about it. In those five years I’d been a devotee, my child got sick).”

Bernardo’s child eventually was cured just days after he joined the feast last year. And since then, he has made a promise to watch over his children.

Now, he has two separate shifts instead of one whole-day shift, if only to spend more time for his family.

Gigi Prepose, 58 and a former club entertainer, has been making her vows before the Nazarene for almost two decades. But she still lamented major setbacks that burdened her family for a time. First, she lost her job as an entertainer when the club she was working for burned down. Later on, she suffered from a stroke.

She said she will never take it against her God for her problems.

Jay Canlas, 26, who made his vows as early as 11 years old, recounted that he just lost his job in a bus company last December, or a month before this year’s Nazarene feast.

He had a more dogmatic view on why he faces his plight despite serving the Nazarene for almost 15 years. “Bakit naman ako mag-ta-tampo? Kagustuhan niya ‘yun eh.”

Canlas said he only viewed his problems as challenges to overcome. “Parang pagsubok lang na huwag akong sumuko,” he added, saying he prayed for the Nazarene for him to find another job.

They are among the millions of bare-footed devotees who flocked to Manila on Friday to attempt to go near the statue, believed to be miraculous.

This year’s procession, though overwhelming in faith from devotees, was marred with a death of one of the escorts. Rodrigo Gorion died of cardiac arrest as he suffocated in the crowd of devotees. The procession had zero casualties in the past four years.

Hundreds were also injured, as they scramble among each other to get near the statue, believing their prayers will come true.

And if they don’t get their answers, they have another year to try again.