MANILA, Philippines–Millions of devotees are expected to flock the Quirino Grandstand on Friday for the Feast of the Black Nazarene, one of the country’s biggest annual religious processions.

Manila Archbishop Luis Antonio Cardinal Tagle started the morning prayer before a crowd of faithful devotees who will attempt to go near the ebony statue of Jesus Christ, believed to be miraculous.

At least 3,500 police were deployed to secure the procession, also known as the traslacion. 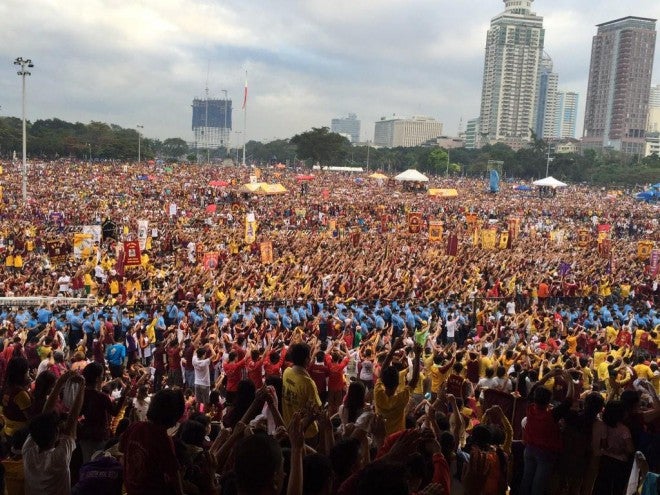 The dense crowd of devotees awaiting the procession of the Black Nazarene. MARC CAYABYAB/INQUIRER.net

The ebony statue of Jesus was brought to Manila by Augustinian priests in 1607. It is said that it got its color after it was burned in a fire that hit the Spanish galleon carrying it.
The procession commemorates the first parade transferring the statue from a church in Intramuros to Quiapo church on Jan. 9, 1767.

This year’s feast will go through the recently retrofitted Jones Bridge instead of MacArthur Bridge, with authorities saying the latter could no longer handle the bulk of devotees.
The procession will also no longer pass through Escolta because of a fire that hit Universidad de Manila there. Instead, it will take the parallel Dasmariñas street.
The traslacion is held just a week before the visit of Pope Francis in the country.