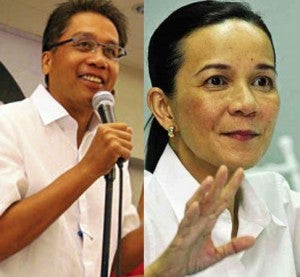 But neither Poe nor Roxas has publicly announced their intention to run for president, though their names had been floated as possible contenders of Vice President Jejomar Binay, who already declared his presidential bid.

Osmeña was initially reluctant to be quoted in the story as he is not a member of the administration’s Liberal Party. But the senator was among those who quietly helped Poe when the latter ran and won in 2013.

“Marami akong source dyan. Talagang pinapa-withdraw si Grace,” he said, adding that the votes would be split if the two would run against each other for president.

Poe ranked second next to Binay in voters’ presidential preference based on surveys conducted by various polling firms.

Asked again if the President, based on his sources, had already convinced Poe to be Roxas’ running mate, Osmeña said: “Hindi pa.”

Sought for comment, Poe said the President had not discussed the matter yet with her.

But asked if she was open to the Roxas-Poe tandem in 2016, Poe said in a text message: “I don’t think it’s fair for me to comment because Sec. Mar himself has not publicly declared his intention to run in 2016.”

Osmeña believes that a candidate without political group like Poe could still win the presidency.

He declined to say though if he would support Poe’s candidacy if she would decide to run for president in 2016.