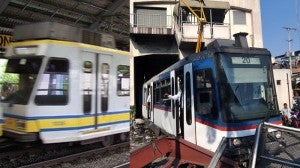 MANILA, Philippines–The Supreme Court did not issue a temporary restraining order (TRO) against the fare increase implemented in the Metro Rail Transit (MRT) and Light Rail Transit (LRT) lines 1 and 2.

Instead, the high court, during the resumption of its en banc session after the Christmas break, ordered the government to give their side on the petitions challenging the fare hikes’ legality.

Respondents have been given 10 days from receipt of the resolution to comment. Named respondents in the petitions are Transportation Secretary Joseph Emilio Abaya, LRTA Administrator Honorito Chaneco, MRT 3 Officer-in-Charge Renato San Jose, the MRT Corp. and the Light Rail Manila Consortium.

“The court required respondents to submit their comment to the petitions and the application for a temporary restraining order within a period of 10 days from their receipt of notice,” the high court said.

Four petitions were filed questioning the fare hike’s legality and assailing the Department of Transportation and Communications (DOTC) for authorizing the increase without public consultation.

Meanwhile, petitioner Bagong Alyansang Makabayan (Bayan) through its secretary general Renato Reyes said “we are saddened over the failure of the SC to issue a TRO against the MRT, LRT fare hike. Commuters’ woes will thus continue. The illegal increase remains in effect. How disappointing indeed that the interests of the poor were not upheld.”

Under the new rates, passengers of LRT Line 1 from Baclaran in Pasay to Monumento in Caloocan City and vice versa must pay P30 for single journey tickets and P29 for stored value tickets, from the maximum P20 fare.

Passengers of the newer LRT Line 2 from Recto in Manila to Santolan in Pasig and vice versa must pay P25 for single journey tickets and P24 for stored value tickets, from P15.

Those taking the MRT 3 from North Avenue in Quezon City to Taft Avenue in Pasay City and vice versa must pay P28 from P15 for stored value and single journey tickets.