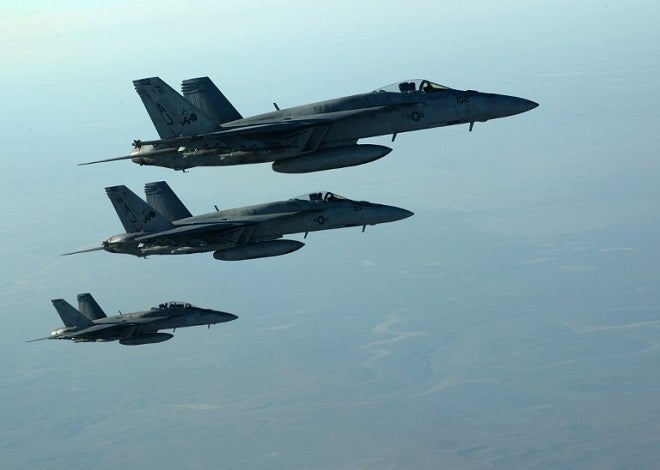 This US Air Forces Central Command photo released by the Defense Video & Imagery Distribution System (DVIDS) shows a formation of US Navy F-18E Super Hornets in flight after receiving fuel from a KC-135 Stratotanker over northern Iraq, on September 23, 2014. These aircraft were part of a large coalition strike package that was the first to strike ISIS targets in Syria. Reports say France will also send the aircraft carrier Charles de Gaulle to support the fight against the terror group. AFP

PARIS, France – The French aircraft carrier Charles de Gaulle and its fleet will be deployed to the Gulf to support operations against the Islamic State group, a military news site reported on Tuesday.

The deployment of the marine battle group is due to be announced by President Francois Hollande when he gives his annual new year’s speech to the armed forces onboard the Charles de Gaulle on January 14, according to the “Mer et Marine” news site.

The Elysee Palace confirmed to AFP that the carrier would travel to the Gulf on its way to India, where it is due to take part in exercises in mid-April.

“The Charles de Gaulle will be available to participate, if necessary, in all operational missions”, the Elysee spokesman said.

According to Mer et Marine, the Charles de Gaulle carrier will travel to the Gulf with its fleet of air and naval craft, including Rafale and Super Etendard fighter jets and an attack submarine, to take part in the US-led bombing campaign against IS forces in Iraq.

The navy and army did not respond to requests for confirmation.

France currently has nine Rafale and six Mirage fighters engaged in the campaign — based in the United Arab Emirates and Jordan — as part of Operation Chammal launched in September, along with a C135 supply plane, E-3F surveillance and control plane and an Atlantique 2 maritime patrol aircraft.