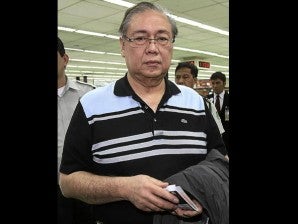 In a motion for leave filed before the anti-graft court’s Fifth Division, Arroyo, the husband of former President Gloria Arroyo, asked the court’s nod for him to travel to Tokyo, Japan, and Hong Kong from January 22 to 30.

Mr. Arroyo reiterated that he was not a flight risk, saying he was presumed innocent until proven guilty and thus enjoyed his right to travel.

“This Honorable Court as well as other courts have graciously permitted him to travel before, and he has always returned here as it is here where his family and business interests are,” the motion read.
He also said he had no reason to flee since his wife, incumbent Pampanga Representative Arroyo who is under hospital detention for plunder over alleged charity funds mess when she was President, was in the country.

“He is thus, clearly, not a flight risk,” he said.

The former first gentleman is accused of selling two second-hand choppers to the PNP and passing it off as brand new.