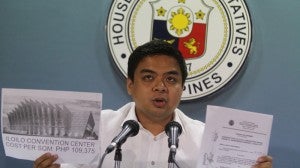 MANILA, Philippines – The Aquino administration, particularly the Department of Trade and Industry (DTI), is being asked to explain why the prices of basic commodities remain high despite successive oil price rollbacks the past few weeks.

“The huge drop in oil prices should directly translate to lower prices of basic commodities, particularly food items. Yet many consumers will tell you that the prices of even the most basic food items have not moved at all,” said Kabataan Rep. Terry Ridon in a statement.

Ridon noted that the major oil companies implemented this week a 95-centavo and 80-centavo per liter rollback in gasoline and diesel prices, respectively.

According to the Department of Energy, gasoline prices had dropped P13 in 2014, while diesel prices dropped by P15 in the past year.

“When the cost of fuel in the world market spikes, manufacturers and producers here in the country are quick to adjust their prices. Yet why is it that when a historical drop in fuel prices is observed, the price of basic commodities remain unchanged?” Ridon asked.

But it looked like the DTI had beaten Ridon to the punch.

Trade Undersecretary Victorio Mario A. Dimagiba said in a text message the DTI has been working on a new suggested retail price (SRP) list, which would cover bread, canned fish and other marine products, potable water in bottles and containers, processed milk, locally manufactured instant noodles, coffee and salt, among others.

This, he said, was the instruction last month by Trade Secretary Gregory L. Domingo, who urged manufacturers to cut the prices of their goods and services to reflect the decrease in transportation costs. Global oil prices had fallen by roughly 30 percent since June 2014.

Based on earlier estimates issued by the DTI’s Consumer Protection and Advocacy Bureau, the decline should see the price of a 155-gram can of sardines going down by 22 centavos; a 370-milliliter can of evaporated milk by 95 centavos; a 50-gram coffee refill by 99 centavos; and a 25-kilogram sack of flour by P25.91.