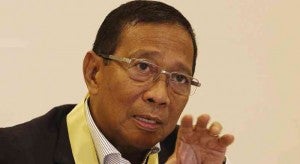 MANILA, Philippines–Despite President Benigno Aquino III’s earlier comment that he was not keen on the Senate’s piecemeal investigation on Vice President Jejomar Binay, Malacañang on Tuesday said it will respect the lawmakers’ decision in case they look into the new allegations of corruption against the embattled official.

(Investigating “in aid of legislation” is part of the Senate’s and the House of Representatives’ tasks or part of their oversight functions related to the passage of the national budget.)

(We acknowledge the right and the obligation of our lawmakers to pursue such investigations because they are part of a separate and coequal branch of government.)

Coloma’s statement came after Senator Antonio Trillanes IV, one of Binay’s critics, told media that he has received reports on anomalies in the Housing and Urban Development Coordinating Council (HUDCC), which is headed by Binay.

Trillanes said he is not sure if the issue will be tackled by the Senate since his filed resolution covered only the alleged overpriced buildings in Makati.

Nevertheless, he said it was possible that the discussion could “branch out and lead to that.”

Meanwhile, Coloma said the executive has faith in the lawmakers who are expected to do what is necessary.

Pag-Ibig Fund also denied the report, saying it does not award projects or deal with contractors.

Darlene Marie Berberabe, Pag-Ibig Fund president and chief executive officer, said they do not favor any contractor, especially since they do not directly deal with them, nor do they award projects.

“On the contrary, we pride ourselves with having leveled the playing field when the new management and the new Board assumed office in 2010,” she said in a statement forwarded by the Office of the Vice President.

At last, good words for Arroyo, Binay from Aquino