Aquino to Vice Ganda: I have to skip necking 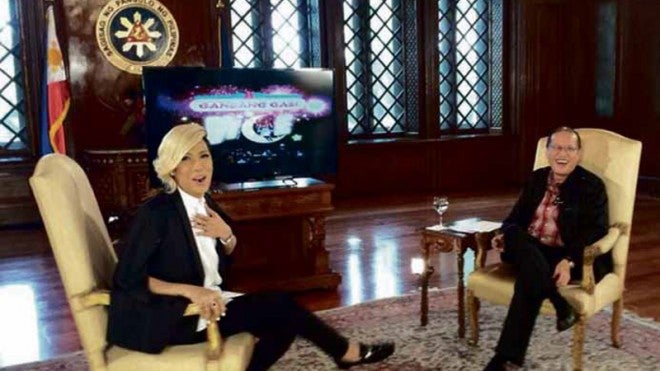 THE INTERVIEW President Aquino with comedian Vice Ganda during their interview in Malacañang aired by ABS-CBN on Sunday. Note shiny floor of the Palace. The comedian and the President’s 38-minute give and take grabbed the top worldwide spot during its airing. SCREEN GRAB FROM VICE GANDA’S FACEBOOK PAGE

MANILA, Philippines–Should his girlfriend kiss him, she’d have to skip his neck, President Aquino revealed in a no-holds-barred interview aired on Sunday night, adding that he still has a bullet lodged near his carotid, the main arteries that carry blood to the head and neck.

The bullet is a nasty souvenir from a 1987 coup attempt against his late mother, former President Corazon Aquino.

Aquino, who remains unmarried at 54, candidly answered questions on such topics as his love life, his thinning hair, the basketball rivalry between La Salle and his alma mater, Ateneo, as well as the women he had been linked to, in a 38-minute interview with ABS-CBN noontime show host Vice Ganda.

But the light-hearted interview drew a number of negative reactions, especially from journalists who have long been requesting to sit down with the President to tackle more serious issues on politics, national security and the economy.

Presidential spokesman Edwin Lacierda, however, said the interview “showed the lighter side of the President” and that “most of the comments were positive.”

Lacierda added: “To a large extent, (the interview) showed the human side of the President, a side that (most of us)… do not have… the opportunity to see first[hand].”

In the interview, President Aquino talked freely about his love life, admitting that he was not currently in a relationship but that he was not giving up on the possibility of settling down, hopefully with a “younger wife so we could still have a child.”

That would have to wait until he steps down in 2016 and returns to “normal” civilian life, the Chief Executive told his interviewer. “Normal” in this case means enjoying the waters of Boracay—which the President once visited for a total of one hour—and “touching base” with his neighbors in West Avenue, Quezon City.

Using his trademark sarcasm and deadpan humor, Vice Ganda managed to get President Aquino to sing a few lines from Freddie Aguilar’s youthful rant “Estudyante Blues,” with the lines “ako ang nasisisi,” (I always get the blame) coming across as a personal gripe.

In fact, when the TV host remarked about Malacañang’s shiny floors, Aquino quipped, “I kept thinking, if the floor (here) gets scratched, would I be blamed for it, too?”

He has two kinds of critics, the President said, with “one who not only looks at a glass as half-empty, but almost empty.”

He added: “He will always find fault in everything. Why do I need to pay him any attention?”

Reading the papers at lunch—he skips breakfast, Aquino said—always makes his blood pressure shoot up. But if he read something that needed a response, he would call up the people concerned and try to resolve the issue, the President said.

Trading on his closeness to the President’s sister, TV-movie star Kris Aquino, Vice Ganda felt bold enough to touch on the President’s thinning hair, even suggesting that his choice of shampoo must have something to do with it. But the President merely shrugged off the ribbing: “Tanggap ko na (I’ve learned to accept it),” he said of his receding hairline, adding that the trait must have come from the Cojuangco side of his family.

It doesn’t bother him, Aquino said, adding that he would even insert this fact to lighten some of his speeches.

The President was, however, guarded in describing former President Gloria Macapagal-Arroyo, his economics professor in college, whom he said was “very knowledgeable” but not the “terror” type.

In one segment called “Fast Talk,” Aquino was shown pictures of government officials and show-biz personalities and was asked to say a thing or two about them.

Shown a photo of beleaguered Vice President Jejomar Binay, the subject of several allegations of corruption, the President promptly described him as a “longtime friend,” having stood side by side with the official during the Edsa Revolution in 1986.

Camarines Sur Rep. Leni Robredo was “continuing what (her husband, the late Interior secretary) Jessie had started,” the President said.

Aquino also took the opportunity to defend Director General Alan Purisima, the chief of the Philippine National Police suspended for alleged corruption. The President said Purisima has been his friend since 1987 and that he knew him as someone who didn’t reflect the “negative image of the police.”

“He arrested so many people and spared no one. He had a lot of fellow men in uniform charged and ultimately jailed because of wrongdoings,” President Aquino said.

Asked by the openly gay talk-show host whether he was open to having gays in the police force, Aquino declared, “In the end, how one looks at a person should be based on how well that person performs at work.”

But the President was more forthright when asked point-blank if he and TV5 newscaster Grace Lee were once a couple. “Yes!” he said.

Shown a picture of celebrity stylist Liz Uy to whom he had been linked, the President described her as “successful,” but declined to answer categorically when asked who was prettier between Uy and ex-girlfriend Lee.

“I’m a politician. It’s difficult to answer questions like that,” was his evasive answer.

His most recent relationship ended several months ago, President Aquino admitted, but declined to say if he has a new “prospect” now.

“They say it’s important to keep a little to yourself. I would just keep it to myself,” replied Aquino, who is said to be smitten with a twentysomething flight attendant whom he met during a recent trip to Europe.–With a report from Marinel R. Cruz