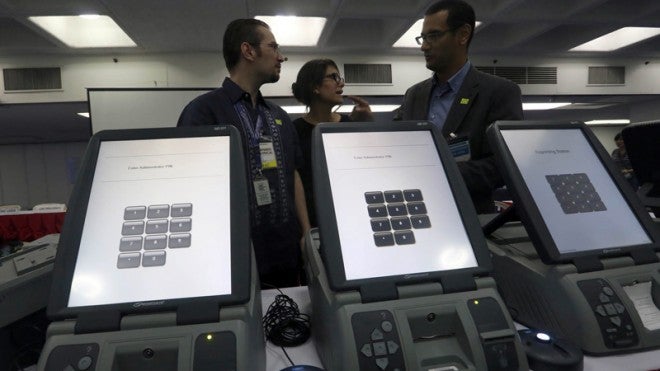 Smartmatic and the Commission on Elections may have concluded a contract to refurbish 82,000 voting counting machines that could cost up to P2 billion, but they still have a lot of explaining to do, according to Sen. Aquilino Pimentel III. INQUIRER PHOTO/JOAN BONDOC

Smartmatic and the Commission on Elections (Comelec) may have concluded a contract to refurbish 82,000 voting counting machines that could cost up to P2 billion, but they still have a lot of explaining to do, according to Sen. Aquilino Pimentel III.

On Sunday, Comelec Chair Sixto Brillantes Jr. announced the conclusion of the contract with Smartmatic and that it was worth P1.2 billion.

But in a TV interview on Monday, Brillantes indicated that the cost of refurbishing the machines, bought from Smartmatic in 2012 for P1.8 billion, could reach P2 billion.

“The proposal of Smartmatic was a three-stage contract, which means they will have to go into what is known as diagnostics or examination of the machines, which they pegged at P300 million. Then they will do the actual repair, maintenance and corrections of any mistake or error with another P900 million. That would be the second stage,” Brillantes said. “There’s a third stage. It’s another P800 million for the upgrading, which is a totally different contract.”

Pimentel, chair of the joint congressional oversight committee on the automated election system, told reporters on Monday the cost of reconditioning the precinct count optical scan (PCOS) machines used in the 2010 and 2013 elections seemed too high.

“What happened to ‘economies of scale?’ Why is it so expensive? Isn’t it supposed to be cheaper on a per machine basis given than there are more than 80,000 machines to be serviced?” he asked.

Both the Comelec and Smartmatic have also yet to address adequately the cause of the digital lines that reportedly appeared on some ballots during the 2013 elections and affected the counting of votes, Pimentel said.

He said the cost of refurbishing the PCOS machines should have been lower considering the number of machines involved in the contract, awarded to Smartmatic before the new year holiday.

Some Comelec insiders said the poll body resorted to the “chop-chop method” to go around Executive Order No. 424, which allows entering into negotiated contracts as long as project costs do not exceed P500 million.

“They went around the EO 424 to allow direct contracting instead of conducting a public bidding,” said one official, who asked not to be named.

“Everything points to the general direction of a hocus PCOS,” Cruz told the Inquirer in a text message Monday. Hocus pocus is a magician’s sleight of hand. “As a registered voter and, therefore, a participant to the 2016 elections, I will do my moral and civic obligation by going to court to disqualify Smartmatic,” he said.

Cruz warned of possible “massive confusion and disorder” before and during the 2016 elections if Smartmatic is allowed to handle the automated polls again.

“It sounds like a midnight deal to me,” said former Comelec Commissioner Augusto Lagman, pointing out that Brillantes is retiring next month. “There should have been a bidding for that service. In fact, with all its violations of Philippine laws and Comelec rules, Smartmatic should have been blacklisted.”

Engr. Hermenegildo Estrella Jr., a coconvenor of the poll watchdog group Citizens for Clean and Credible Elections, or C3E, accused the Comelec of “willingly ignoring legalities just to accommodate Smartmatic.”

“We wonder what skeletons are in the PCOS machines that the Comelec is breaking laws and risking lawsuits just to make sure that Smartmatic bags the PCOS deal,” he said.

Brillantes has dismissed the allegations of his critics, calling them “troublemakers” and “attention seekers.” He said on Sunday that he would respond at the right time and venue to concerns raised by various groups, as well as the procurement of P2 billion worth of additional voting machines.

What about digital lines?

Pimentel said Monday he was awaiting a satisfactory explanation on the digital lines, which had allegedly touched or bisected some of the ovals that voters had to shade in the ballot to indicate their chosen candidate.

Thus, a vote could have been counted for a candidate even if the voter did not shade the oval for his or her name. Or, a vote for a particular position could have been nullified because of overvote, since the PCOS machine does not count the vote in such a situation.

“Comelec has not formally and officially explained the root cause of the digital lines discovered by the technical committee. The digital lines were not even discovered or pointed out by Smartmatic!,” Pimentel said in a text message.

Since the cause of the digital lines has not even been explained, he wondered whether the task of reconditioning the PCOS machines would address this issue.

“Will [refurbishing] just be cleaning the machines or is that meant to address the root cause of the digital lines?” he said.

In December, Brillantes announced that the poll body would study 383 polling precincts to check the presence of digital lines appearing on ballots and to determine their cause. He earlier also said that while there may have been digital lines, he did not think they had affected the overall results of the elections.

Pimentel expressed disappointment at the slow pace of the probe, since he had expected results by December. He had made the request for an investigation on the digital lines in September, during a hearing of the joint congressional oversight committee.

The award of the contract to Smartmatic comes amid allegations from poll watchdog groups that electronic padding and shaving of votes took place during the 2013 elections.