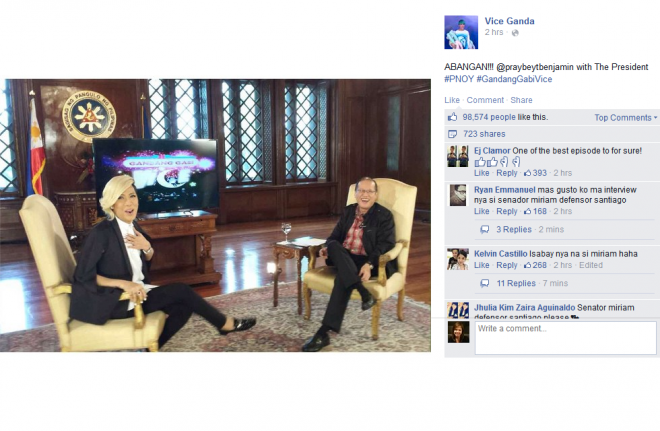 During the interview, Aquino offered viewers a glimpse of a President who loves singing when he’s alone, prefers to take long drives to unwind, hopes to become a father, and enjoys being a brother to an “interesting” personality.

Aquino revealed in the interview that he is recently single after seeing someone “up to several months ago.” He also confirmed that radio and TV personality Grace Lee was his girlfriend, whom he described as “successful.”

Asked if he wants to date someone younger or older than him, the bachelor President said that he wants to have a girlfriend who is younger than him in order to have a chance to have kids.

“Mas bata sana kung puwede para may pag-asa pa naman para magka-anak (I hope to meet someone who is younger than me so that we can have a child),” he said.

One of the highlights in the interview was Aquino singing a few lines from youth anthem “Estudyante Blues” by Freddie Aguilar. He said Black Eyed Peas member and Voice of the Philippines coach apl.de.ap has complemented his good singing voice.

“I was told by apl.de.ap that I have a good singing voice,” he said in Filipino.

Aquino described growing up with his younger sibling Kris as “interesting.” He disclosed that he and Kris would sometimes fight.

Aquino said he maintained a close relationship with Kris’ sons Josh and Bimby.

The President revealed that he takes long drives, sometimes without the knowledge of his presidential security staff, to unwind and cope with the stress associated with his job.

“Parang in control ka doon sa buhay mo, para bang normal ulit. May oras kang mag-isip, wala kang iniintindi (It feels like you’re in control of your life, as if you are living normally. You have time to think),” Aquino said when asked why he takes long drives.

Echoing his previous statements, Aquino said that after the presidency, he will go back to their family home on Times Street in Quezon City to chat with neighbors and then take a vacation to places he promoted.

(First, I have to readjust my life on Times Street; touch base in the neighborhood and go to places I have previously visited. Then after the first month, I also want to take a vacation in places I promoted for our tourism campaigns which I only saw for 10 seconds or 15 minutes.)

The interview, which lasted for more than 30 minutes, became a trending topic on Twitter, topping Twitter’s worldwide trends during the time it was aired.

Meanwhile, netizens were divided on the President’s appearance on the show. Some lauded the President for granting the interview, which reportedly made him more relatable to his constituents. However, some also blasted Aquino for appearing in the show while failing to attend to more pressing national issues.