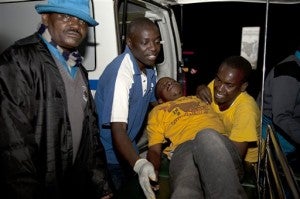 NAIROBI, Kenya–A high-rise building collapsed in the Kenyan capital on Sunday, leaving at least a dozen injured and an unknown number of others trapped under rubble, officials and witnesses said.

The remains of the six-story residential building, situated in Nairobi’s Haruma neighborhood, were being scoured by police and rescue workers.

An AFP photographer saw two victims being pulled from the rubble alive, while at least 10 others were admitted to a nearby hospital, medical staff said.

Large numbers of residents also swarmed to the site, volunteering to dig in the rubble with their bare hands, although crowds were pushed away by police as heavy lifting machinery and official rescue teams were brought in.

Kenya’s KTN news channel said 20 ambulances had been put on stand-by in the area.

The collapsed building borders a primary school on one side and a maze of similar, densely populated houses on the other.