Moderate traffic reported as all roads lead to Metro Manila 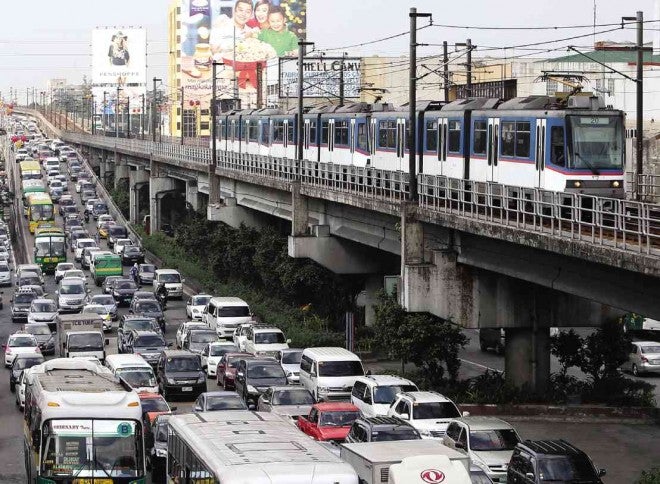 Traffic builds up near Edsa-Kamuning in Quezon City as people head back to the metropolis at the end of the holiday break. Traffic flow on expressways in Central and northern Luzon, however, has been reported to range from light to moderate. RAFFY LERMA

MANILA, Philippines–Unlike the nightmare experienced by motorists on their way to Baguio City and the Ilocos provinces on the three expressways in central and northern Luzon after Christmas, travelers enjoyed a relatively smooth ride on their way back to Metro Manila on Sunday.

“There is a big volume of vehicles using the expressway but [they’re coming in on a staggered basis],” Reyes said in a phone interview.

The TPLEx was built to reduce travel time to Baguio City from six hours to four-and-a-half hours.

On Dec. 26, northbound traffic crawled at a snail’s pace from Pozorrubio town in Pangasinan province to Rosario town, La Union province, because of the huge number of vehicles bound for Baguio City and the Ilocos provinces.

Reyes said more ambulant tellers have been deployed to man TPLEx’s toll booths in Rosales, Pangasinan, and Tarlac City to cope with the growing number of motorists.

He added that the TPLEx section from Rosales town to Urdaneta would remain toll-free and open until Jan. 20 to allow motorists from northern Luzon to use it when Pope Francis visits the country from Jan. 15 to 19.

He said that the road closure was necessary to complete the unfinished work on the expressway.

Senior Insp. Rommel Centeno, police chief of Sison town in Pangasinan, said that policemen and traffic enforcers had been deployed to his area and the neighboring town of Rosario to immediately respond to any situation that may arise in the area.

“We do not want a repeat of what happened on Dec. 26,” Centeno said.

He said that at 7 a.m. on Sunday, a passenger bus from Ilocos Norte stalled on the southbound lane in Rosario, stopping traffic flow for a few minutes.

In Dagupan City, residents who had come home for the holidays, flocked to bus terminals on Sunday as they began their journey back to Metro Manila in time for this year’s first working day and the resumption of classes Monday.

Edmar Corpuz, dispatcher of the Five Star Bus Co., said that the long lines of passengers bound for Metro Manila started forming in the bus terminal at 9 a.m.

According to him, the normal 20-minute interval between buses leaving the terminal had been reduced to five minutes.

At the nearby Victory Liner bus terminal, dispatcher Arnel Gabaig said the company had deployed additional buses leaving for Metro Manila as passengers began arriving at the terminal starting on Saturday afternoon.