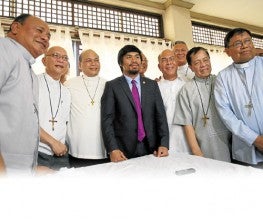 KNOCKOUT POWER. Sarangani Rep. Manny Pacquiao poses with leaders of the Catholic Church during a news conference at the Catholic Bishops Conference of the Philippines (CBCP) in Manila on Tuesday. At left is CBCP president Bishop Nereo Odchimar. World boxing pound-for-pound king Pacquiao has publicly come out swinging against the reproductive health bill now pending in Congress which the Church strongly opposes. NIÑO JESUS ORBETA

Asked on Tuesday how he and his wife Jinkee were managing the growth of their family amid a published report that the latter was using birth control pills, the Sarangani lawmaker replied in Filipino: “You know, in reality, even if the RH (reproductive health) bill has not yet been passed, many people are already using condoms or [birth pills]. So why do we still need to pass it when people are already using them?”

Wearing a dark blue suit and a purple tie, Pacquiao lunched with officials of the Catholic Bishops’ Conference of the Philippines (CBCP) to express his full support for the Church in countering the RH measure.

Purple is the color adopted by RH advocates. “[But] this tie has nothing to do with the issue … Actually my wife prepared this for me,” Pacquiao said in a subsequent press conference with the bishops, eliciting laughter from reporters who had pointed out the oversight to him.

He confidently said he could get away with it because he was already known in Congress as among those speaking out against the legislative measure that seeks to provide Filipinos an informed choice on the family planning method best suited for them.

Pacquiao said he was against artificial contraception because, he claimed, it was against the will of God.

“God said, ‘Go forth and multiply.’ He did not say ‘Go and have just one or two children,’” he said.

But in an interview with reporters, Sen. Miriam Defensor-Santiago said the eight-division champion was behaving like a religious “fundamentalist” who had no business interpreting the Bible to support his position.

Pacquiao’s interpretation of God’s injunction to “go forth and multiply,” Santiago said, “sounds very much like God is encouraging us to go out and copulate in public.”

“God said in the Bible, ‘Go forth and multiply.’ That meant that God wanted man not necessarily to literally multiply, but to go out to work with the rest of the human beings of this planet and to apply the stewardship theory. Meaning to say, taking care of each other, who are all in the planet together,” she said.

The senator said her comments were “facetious,” but warned the boxing superstar against interpreting the Bible literally.

“It is very dangerous to quote the Bible and apply it literally, as Pacquiao is doing,” she said. “Bakit mo papasukan ito e kaming mga senador hindi papasok sa pagboksing? Pero kung gusto mo, eh di puwede rin (Why are you venturing in it when we senators would not venture into boxing? But if you like, maybe we can).”

Santiago said there was an “element of hypocrisy” in Pacquiao’s position on the RH bill, pointing out that while his wife had been quoted as saying that she was on the pill, he himself was reported to have said that he was applying discipline to space their children.

“In that case, apparently, Pacquiao would have to use violence on his wife because she is not living in conformity with his beliefs,” the senator said.

Santiago downplayed the impact of Pacquiao’s “star power” in the Catholic Church’s campaign against the RH bill.

She heaped praise on Pacquiao’s remarkable accomplishments in boxing but warned her fellow legislator: “We cannot be know-it-alls. It will be very misleading to use his celebrity status to enter into what is, after all, a great debate on the political economy.”

Pacquiao had earlier expressed his stand against artificial contraception and urged couples to practice sexual abstinence and natural family planning.

He said there would not have been a Manny Pacquiao if his parents, who were poor and had no jobs, used artificial birth control methods.

Pacquiao is the third child in a brood of four. He has four children with his wife Jinkee, who was quoted in a published report as saying that she was on the pill because she did not want another child after their youngest, Queenie.

In reiterating his stand against the RH bill, Pacquiao on Tuesday said the Philippines’ big population should not be blamed for the plight of the poor.

“We should blame corruption because the money that is supposed to help the poor goes to the pockets of officials who are already rich,” he said.

Pacquiao called on his fans nationwide to rally behind the Catholic Church and “follow God’s command, not man’s.”

His remark drew applause from the audience, mostly lay people who had provided for the hearty lunch and arranged his meeting with the bishops.

All are members of the CBCP Permanent Council, which convened on Tuesday for its usual quarterly meeting.

“We are happy to have him with us, that he came on his own accord to be one with us and to assure us that he is with us in this fight, to defend human life,” Odchimar said at the press conference.

Odchimar said Pacquiao’s promotion of “the culture of life” was a big boost to the Catholic Church in contesting the bill “because people listen to him.”

“We welcome anybody who is as popular as Manny or an ordinary person who would promote the value of life,” the bishop said.

During the press conference, Pacquiao doused speculations that President Benigno Aquino III had snubbed him because of their opposing views on the RH bill.

He said he was not taking it against the President that he was not received in Malacañang when he flew in from the United States on Saturday following his victory against four-time world champion Mosley.

“I understand that he had other important things to do that day and I would like to make it clear that my stand against the RH bill doesn’t mean that I am opposing his government,” Pacquiao said of Mr. Aquino.

He said the President had his full support when it came to government measures countering corruption.